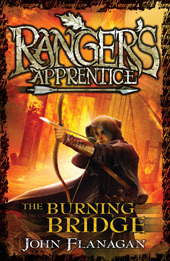 The Burning Bridge by John Flanagan

I love holidays! Lots and lots of reading!!

This is the second book in the Ranger's Apprentice series. I reviewed the first one, Ruins of Gorlan here.

My biggest disappointment with this book is that I didn't think to borrow number 3 before the library closed for the week between Christmas and new year!

Burning Bridge see's Will set off Gilan and Horace on a mission to Celtica. As Araluen prepares for war against Morgarath, they are tasked with seeking the support of King Swyddned of the Celts. However the villages in Celtica have been deserted and a meeting with a starving girl called Evanlyn lets them know that Morgarath have been enslaving the Celts. As the party discovers Morgarath's true plans, it may be up to them to turn the tide before it's too late.

Once again I was highly impressed with Flanagan's writing. Too often I find fantasy books aimed at young adults/ older children simplistic and disappointing. Flanagan manages to walk the fine line of not making it too complicated while not having the characters solve what appears to be difficult and dangerous problems with ease. Each book is finished, there is a resolution to the main problem in the book (in this case the impending invasion from Morgarath) but there is a clear path to the next book. I look forward to when my son is old enough to read this, I think he will really enjoy it. I would recommend it for a confident 10 year old reader, or a 12+.
Posted by Unknown at 8:22 AM