Tomorrow is New Years Eve and I know I'm not going to finish my current read before the calendar ticks over into 2012, so I thought I would do a 2011 Challenge Wrap up.

Hosted by  Becky over at Becky's Book Reviews, this was the first year I've done this challenge. I attempted to read 52 books for this challenge (26 titles, 26 authors) and unfortunately did not make it. In the titles area I missed K, N, Q, V, X and Z. With the authors I missed R, T, U, X, Y and Z. You can see my list here.
It was a fun challenge, but I wasn't really interested in hunting out titles or authors so I don't think I will do this one again.

Aussie YA Challenge
Hosted by Nic over at Irresistible Reads, I signed up to read 12 Aussie YA authors. I completed the challenge on May 30 and went on to read another 21 Aussie YA books, taking my total to 33. I didn't keep up with putting my reads on the linky list - bit remiss of me really. You can see my list here.
I don't know if Nic is hosting another Aussie YA challenge, but I have signed up for an Aussie Author Challenge over at Booklover Book Reviews.

Twenty Eleven Challenge
Hosted by Bart over at Bart's Bookshelf, the idea of this challenge was to read one or two books in 11 categories. You had to read at least one of every category. I read 18 out of a possible 22 books. Not bad I thought. You can see my list here.
I don't know if Bart is running something like this again in 2012, but if he is, I would join! For the Love of YA Reading Challenge
Hosted by Jamie over at Jamie's Bookshelf, I originally signed up for the Fun level (20 books) which I completed on May 30. I set my sights on the Jumbo level (40 books) which I hit on October 8. Obviously at that point my YA reading slowed down as I only added another 4 books, missing the Mega level by 6 books. You can see my list here.
Although this was fun, I don't think I will participate again next year. 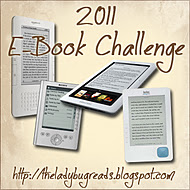 2011 E-Book Challenge
Hosted by the Ladybug over at The Ladybug Reads, I originally signed up for the fascinated level (6 books) which I reached on June 24. I've fallen short by one book for the addicted level (12 books.) You can see my list here.
Next year this will be hosted by Workaday Reads and I will be signing up again. 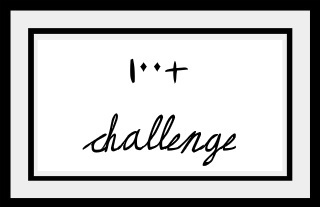 100+ Reading Challenge
Hosted by Home Girl, the idea of this challenge was to read at least 100 books. I read 104, which is 5 less than I read in 2010. I also kept stats for this challenge which were as follows.

Fiction -89
Non Fiction - 14
Adult -54
Young Adult - 44
Children - 4
Australian -43
You can view my full list here.
Although I will keep a list of what I read next year, I don't think I will sign up for an official challenge.
So that's 2011. I've selected four challenges for 2012 so far and may add another one or two. I'll be officially signing up for these challenges and doing the initial blog posts for them over the next week. If you are interested in what I have chosen so far, you can see them here.