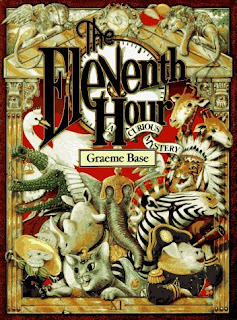 
When you look at the detail of Base’s illustrations, it doesn’t surprise you that there was two years between books. The Eleventh Hour provides another sumptuous visual feast. At the beginning of the book we are told,
A book is read, a story ends, a telling tale is told.
But who can say what mysteries a single page may hold?
A maze of hidden codes and clues, a clock at every turn
And only time will tell what other secrets you may learn... 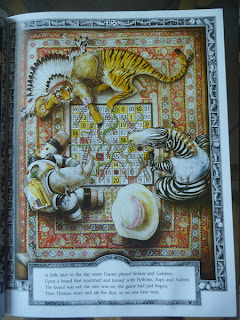 And once again you are off on a magical journey through a Graeme Base book where there is always more to see than you first thought.

On the occasion of his eleventh birthday, Horace decides there is need for a great party. A feast is prepared, games are organised and friends are invited. Before they are allowed to eat, the guests take part in a variety of party games, all looking forward to the feast they know is to come. But in the end, the feast is gone, eaten in its entirety. The question is – who did it?

The clues to solve the puzzle are in the hidden messages and pictures on each page, once again inviting the reader to spend hours poring over the book, trying to solve the mystery. Each page has a hidden message. Some are easy to find, but provide useful information. 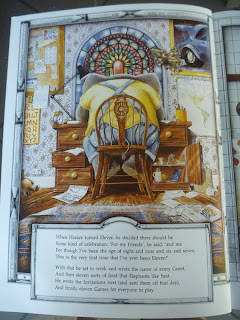 Drawing conclusions from sketchy clues may lead you astray – so sharpen your eyes and your wits – get the point?
(This is written in the pencils around the edge of the picture. There is another clue hidden in them as well.)
While others are easy to miss, especially when there are two on a page! At times Base uses codes such as mirror writing, substitution codes and morse code. All challenge the reader to work out what is worth noting, and what is a red herring. Don’t worry, if you can’t work it out (and I couldn’t!) there is a sealed section that reveals all the secrets! 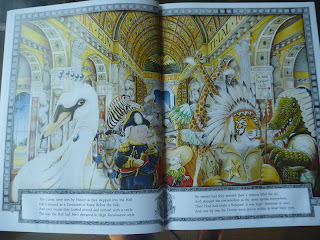 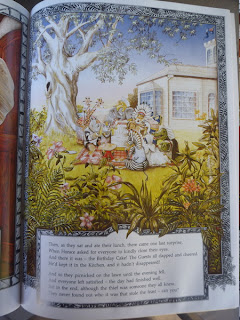 However for me, the joy of this book doesn’t end there. The story is written in rhyme, which lends to the whole atmosphere of the book. 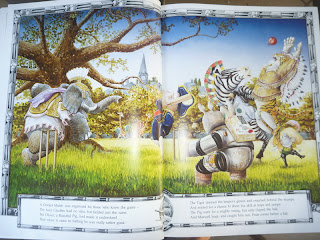 A Cricket Match was organised for those who knew the game -
The twin Giraffes had no idea, but fielded just the same.
But Oliver, a Boastful Pig, had made it understood
That when it came to batting he was really rather good.

The Tiger donned the keeper’s gloves and crouched behind the stumps,
And waited for a chance to show his skill at leaps and jumps.
The Pig went for a mighty swing, but only clipped the ball,
And Maxwell leapt, and caught him out. Pride comes before a fall.
The Eleventh Hour cemented Base's place as one of greatest author/ illustrators in Australia and he continues to produce excellent, exciting books.
Links to other Graeme Base books I am looking at can be found here.

The official Graeme Base website can be found here.