What the Mother Knew 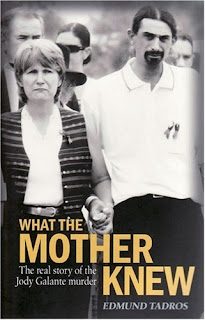 What the Mother Knew: The Real Story of the Jody Galante Murder by Edmund Tadros

On January 7, 2006, Mark Galante reported his wife Jody missing. For the next 6 weeks he played the part of grieving husband, making public pleas for her safe return. In reality, Mark knew exactly where Jody was and what had happened to her, because he had killed her.

Jody's mum, Julie-Anne wasn't overly fond of Mark. She didn't like the way he controlled who she could and couldn't see, where she could and couldn't go and felt sure he was instrumental in her disappearance. However, she supported him, held his hand at Jody's funeral, comforted him during press conferences, all to protect her grandchild and to give the police the time they needed to collate the evidence. They didn't want to tip Mark off.

I've always admired Julie-Anne Hand. It's unthinkable to stand next to the man you and the police are sure killed you daughter and hold his hand.

Tadros says in the introduction of the book:

This is not the book I intended to write. That book focused on...Julie-Anne Hand, and the investigation into Jody's murder. but, as I began talking to friends, family and acquaintances of Jody and her husband, Mark, it became clear that many answers lay in the past.
The issue then became how much I should reveal to the public. There is an amorphous lone between reporting accurately and providing to much detail...I have always erred on explaining enough so that it is clear wha is going on without going into excessive detail.
This line is different for everyone so it is up to the reader to decide if I have succeeded or failed in this regard.

For me, he failed. The book examines the events leading up to Jody's murder and the events leading to Mark's arrest. In the end, it has very little to do with Julie-Anne. I thought the book would look at her feelings, what she knew, how she knew and how she found the strength to pretend to be supporting Mark while wanting to get him as far away from her and her family as possible.

The book is well written and informative - it's just not what I thought it would be about. Given it's not the book he planned to write either, maybe Tadros should have changed the title.
Posted by Unknown at 11:35 AM