The Dog Who Loved a Queen

The Dog Who Loved a Queen by Jackie French.

Jackie French has to be one of my favourite children's/ young adult writers. She is witty, intelligent and does not talk down to her reader. Her picture book Diary of a Wombat is most probably one of my all time favourites.

I picked up The Dog because it was in a box of books I was covering for my son's school library. It's a new school and you can just imagine the amount of books that need covering! Anyway, this caught my attention since a) it was Jackie French and b) it was royal history. Based on a true story, it is told from the point of view of a dog (Scottish terrier) who became the pet of Mary, Queen of Scots, during her imprisonment by her cousin, Queen Elizabeth I. It presented the history well for the target audience, keeping it simple without omitting too many details. Yet, for me, it fell flat. For me it just did not adequately express the length or dreariness of being held captive for 19 years. I don't think kids will fully understand it's effect, focusing more on the apparent lavishness of Mary's prison. The problem is, I'm not sure how you would convey the idea that regardless of how lovely the room, how sumptuous the meals, how nice the gaolers, the complete loss of freedom to move about as you wish would be horrendous. Apparently there are others in "The Animal Stars" series, but I don't think I'll go looking for them.
Posted by Unknown at 9:28 PM 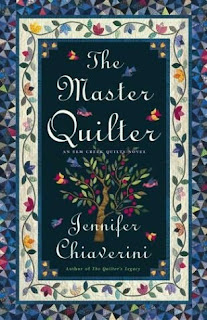 The Master Quilter by Jennifer Chiaverini

Book six in the Elm Creek Quilts series  starts with a letter to previous quilt campers, friends and colleagues of Sylvia asking them to make a quilt block to contribute to a bridal quilt for Sylvia and Andrew. They need 140 and are hoping to get enough despite the short notice.

This is the first book since the second one (Round Robin) that focuses mainly on the Elm Creek Quilters themselves. The big theme for the book is change! There's a lot of it going on! Issues surrounding work, relationships and family abound. It's hard to say too much without giving away what happens in the book. Needless to say, it is all sorted by the end and while there is still heartache to endure and decisions to be made, you know that this bunch of friends will be around to support each other, no matter what!

This is the last of the Elm Creek books I have already read. To tell you the truth, I thought I'd only read 3 or 4! I have read the synopsis of the next book and I know I haven't read it! It's on hold at the library and I need to read The Poisonwood Bible for this month's book club, so there will be a slight reprieve from the Elm Creek books. Aren't you pleased!?
Posted by Unknown at 4:39 PM 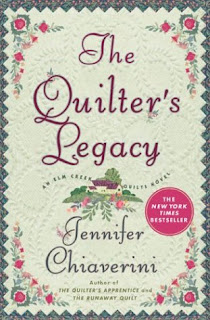 The Quilter's Legacy by Jennifer Chiaverini

I got The Runaway Quilt, The Quitler's Legacy and The Master Quilter in one anthology so they got read in one hit.

The Quilter's Legacy focuses on Sylvia's search for 5 quilts her mother made and her sister sold during her and Sylvia's estrangement. As a child, Sylvia knew these quilts as the "fancy quilts." Ones bought out for special visitors as opposed to the every day quilts usually draped on the beds.

Using a variety of clues, Sylvia and the rest of the Elm Creek quilters track down what has happened the 5 quilts. Some are recovered, others aren't, but in the end, their fates are mostly known.

Running parallel to Sylvia's hunt, is another lesson in her forebears history. The reader is let into the story Sylvia doesn't know - how each quilt came to be made and it's significance to her mother. Obviously Chiaverini felt that another undiscovered diary would be way to much of a plot device, especially straight after The Runaway Quit used it. I'm glad though, that she allowed the reader to know what had happened, even if her characters remained in the dark. At the end of the book however, when Sylvia finds the last remaining quilt and sets the record straight on it's maker and part of it's history, she vows to delve into her mother's history and find out about it, acknowledging that her mother's side of the family is just as much a part of her personal history as her father's already much lauded and celebrated heritage is.
Posted by Unknown at 4:27 PM 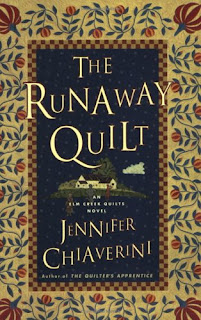 The Runaway Quilt by Jennifer Chiaverini

Yep, another Elm Creek Quilt novel. They are just so easy to chew through!

In the fourth novel in the series, Sylvia is approached by Margaret Alden who owns a quilt called the Elm Creek Quilt. It is a family heirloom and the connection to Elm Creek has been lost. It is also known as the Runaway Quilt. Stitched into the quilt's quilting design is Elm Creek Manor and part of the surrounding country side. What has Sylvia in a flap is Margaret's family are Southerners and her descendants were slave owners. Could this quilt have been taken south by a descendant of Sylvia's, meaning there was a slave owner in her history? The encounter encourages Sylvia to go searching for a chest which is suppose to contain a quilt made by her Great-Grandmother Anneke. Not only does Sylvia find the quilt, she finds another and a diary written by her great Aunt Gerda. As Sylvia reads the journal, she discovers several stories from her childhood are true, others have been exaggerated or changed over telling and of her ancestors involvement in the underground railway.

Once again Jennifer Chiaverini has managed to keep the Elm Creek series interesting by making the main focus of the book someone other than the already familiar characters. Being Australian, I don't know a lot of American history, but I was aware of the issue of slave ownership, the eventual war between north and south and how which side of the border you were on was not necessarily indicative of your views on the matter. This novel did teach me more about how slaves tried to escape and the difficulties they faced. I always assumed if they made it over the border into the north, they were safe. Instead, they had to be able to make it all the way to Canada. Even northerners who assisted escaped slaves were able to be prosecuted. Despite it's light weight feel, The Runaway Quilt gave me much to think about - not only in terms of slavery and escape, but the role of quilting and sewing in American history.
Posted by Unknown at 4:07 PM

Bibliofreak is giving away a copy of The Forty Rules of Love by Elif Shafak here! 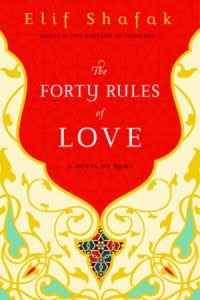 Even better, it's an international giveaway! Yay!! Head on over and check it out!
Posted by Unknown at 6:22 PM 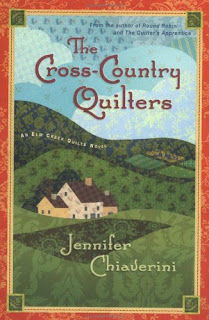 The third in the Elm Creek Quilts series  and such a easy read after Great Expectations! Although I swear this series is bad for my health. Once again I stayed up to stupid hours to finish it, something I now regretting late on Friday afternoon with two kids who have been cooped up inside for the better part of the week due to wet weather - but I digress!

The Cross Country Quilters follows five of the quilt camp participants over a year. When they first meet at an Elm Creek Quilt Camp, they are all facing challenges in their lives. They form a friendship over the week and promise to return a year later, a block completed to be made into a group quilt and their challenges met, if not solved.

This is the first book in the series where the characters are not those who run Elm Creek. I found it refreshing to met new characters and follow their stories. I must admit one of the things that does concern me about such a prolific series (there are currently 14 books with more planned) is there is only so much tragedy/ life changing moments/ disasters one set of characters can go through. By following campers, Chiaverini was still able to incorporate Elm Creek and still move away from it's borders.

You could read this as a stand alone easily since it mostly deals with separate characters. For me personally, I find it impossible to read a series of books out of order. In fact, I find it hard to read an authors unconnected works out of order. You should see the dilemma George Lucas put me in by release Star Wars episodes 1, 2, and 3 after 4, 5 and 6!
Posted by Unknown at 5:49 PM 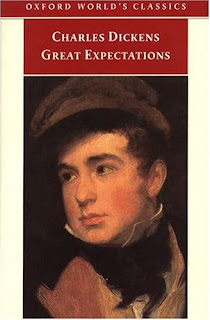 Well to tell you the truth, I forced myself to read this, especially towards the end. As I mentioned in this post, I'm not terribly good at the classics. I find I get bogged down in the language and am sure I miss much of the finer details because I'm wading through a sentence that is half a page long. At the same time, I can understand the horror people would feel at the "modernising" of those books we consider classics. However, as our everyday language moves further and further away from the language of the 1800's, I fear we will lose more and more of these books.

Having said that, I did find reading the book added to my understanding of Mr Pip. Several comments made by characters in that book now make more sense. I felt for so many characters in the book - Pip himself who wanted so much to fit into one world, but being painfully aware of the world he had come from, Joe who loved Pip no matter what, Wemmick with his two lives that shall never meet. Others just annoyed me. I felt like shaking Miss Havisham and telling her to just build a bridge (and get over it!). Estella was not much better given she knew what Miss Havisham was doing to her and doing nothing to take control of her own destiny. But even that I suppose is me putting a modern day perspective on an older and very different time.

Did I enjoy it? Not really. Would I read it again? Highly unlikely. Am I glad I can say I have read it? Yes. And for that reason I feel it was worthwhile.
Posted by Unknown at 9:48 PM

What are you reading Monday?

OK, I know it's Tuesday but life has been busy!
So what am I reading?
I'm still working through Great Expectations by Charles Dickens. I was inspired to read this because of Mr Pip. And you know what, to tell you the truth, if it wasn't for Mr Pip and the fact I enjoyed it so much, I don't think I would keep going. Seriously, I'm just not cut out for the classics! Only 50 odd pages to go. I think I can, I think I can...
Posted by Unknown at 8:58 PM