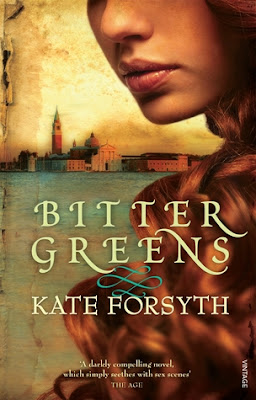 From Goodreads: An utterly captivating reinvention of the Rapunzel fairytale weaved together with the scandalous life of one of the tale's first tellers, Charlotte-Rose de la Force.
Charlotte-Rose de la Force has been banished from the court of Versailles by the Sun King, Louis XIV, after a series of scandalous love affairs. She is comforted by an old nun, Sœur Seraphina, who tells her the tale of a young girl who, a hundred years earlier, is sold by her parents for a handful of bitter greens...
Selena is the famous red-haired muse of the artist Tiziano, first painted by him in 1512 and still inspiring him at the time of his death, sixty-four years later. Called La Strega Bella, Selena is at the centre of Renaissance life in Venice, a world of beauty and danger, seduction and betrayal, love and superstition, retaining her youth and beauty by the blood of young red-haired girls.
After Margherita's father steals a handful of parsley, wintercress and rapunzel from the walled garden of the courtesan Selena Leonelli, he is threatened with having both hands cut off unless he and his wife give away their little red-haired girl. And so, when she turns seven, Margherita is locked away in a tower, her hair woven together with the locks of all the girls before her, growing to womanhood under the shadow of La Strega Bella, and dreaming of being rescued...
Three women, three lives, three stories, braided together to create a compelling story of desire, obsession, black magic and the redemptive power of love.

Thoughts: Kate Forsyth has become one of those authors I immediately recommend to people who ask me for something new. Her writing is fluid, magical, provoking strong images and emotions. Her female characters are flawed but strong and compelling. And when the blurb tells you it's "three stories, braided together" it speaks true - the stories are interwoven, each strand clear and engrossing but so precisely interlocked with the others the change over is seamless. The women have lives that are complicated and intriguing. They are living in a time when their sex can be such a disadvantage, yet all of the rise against this and carve out a life of their own - not perfect, but theirs. Still their paths cross and their stories overlap and parallel. It's a bit like seeing an intriguing pattern come to life with words instead of lines.
Add to this Forsyth's incredible detail of King Louis XIV Versailles court, her attention to detail in her research shining through and you have a book well worth exploring. Much like the court itself, Forsyth's descriptions are rich, but there is an undertow of seediness as well.  You can see the tightrope the court walks on to maintain the favour of the king, knowing full well how devastating the drop will be if you fall.
Bitter Greens is a book to immerse yourself in. It is a book that will make you fall in love with fairytales all over again.

So are you ready for Christmas? I'm not, nowhere near it! I'll just stick my fingers in my ears and sing la la la for a little while longer!

8 reads this month. Not bad, but I am unlikely to hit my target of 100 by the end of year. Such is life, no biggie really. 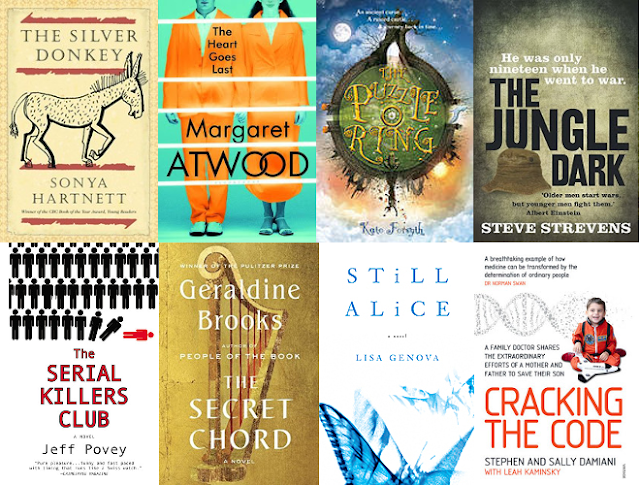 Big month for audio - 3. Only one that I was really impressed by though was Still Alice. The Heart Goes Last and The Serial Killers Club fell short of the mark. I was bitterly disappointed with The Heart Goes Last as I quite like Margaret Atwood but this one just didn't do it for me.

The Jungle Dark was a very personal read for me and has definitely left it's mark, but the pick of the month is by far and away Geraldine Brooks' The Secret Chord. Brooks is an author who just gets better and better. The Secret Chord has reminded me I've yet to read Caleb's Crossing so expect to see that soon.

Nothing new borrowed or bought this month, although I have made a list of books I hope to get through over the Christmas break. I made it a few weeks ago and have already made a start, but this is what is still on it.

This list only includes those books I actually have in my possession. My actual TBR list is way longer!!

So how was your November? What are your plans for holiday reading?
Posted by Unknown at 3:43 PM 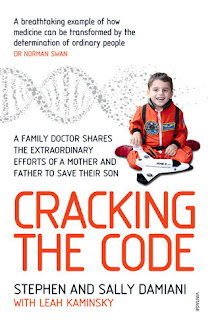 From Goodreads: This story of a father's search to find a diagnosis, and ultimately a cure, for his son's mystery disease is an inspiration that has set the world of genetic medicine and research abuzz with the possibilities for the future.

Thoughts: Yet another book I was drawn to through Richard Fidler's Conversation Hour. Stephen and Sally Damiani's world was turned upside down when their first born child, Massimo was diagnosed with Leukodystrophy. The problem with Leukodystrophy is it has many variations - lots of them unidentified. Massimo had one of these forms. So the Damiani's set to work. Sally became responsible for managing Massimo's day to day care - therapies, medications, appointments - and Stephen became responsible for find a cure. OK, that may be a little dramatic, but he immersed himself in research to determine exactly what variation of the disease Massimo had and therefore develop effective therapies and treatments.
This book is a great example of what can happen when you are not constrained by the conventions of a job or industry. When you are not part of the machine, you do not see the reasons something can't be done. You see the reasons why it should and set about working out how.
The Damiani's were lucky in several ways. Whether you believe it to be fate, divination intervention or just plain coincidence, they met several people on their journey who were not only able, but willing to help them in their quest. From being able to ask questions, to mapping Massimo's genome, to finding someone who understood how to read that genome, the Dimaini's ended up with an army of people on their side.
Cracking the Code is a fairly easy read. It's not bogged down in scientific jargon and at the heart of it is a pretty cute kid. Every parent will feel for Stephen and Sally. As a parent I was in awe of their determination and drive, but wonder is it any less than I would have done for my kids. I see a lot of my husband in Stephen - if there is a problem you work out how to fix it. While it's not discussed in the book (and nether should it have been), the Damiani's obviously had access to some financial support or fund as much of what they did was not cheap and not publicly funded. They also had the education level and intelligence to fully understand what needed to be done and to further educate themselves. I'm assuming not everyone is able to teach themselves genomics in the way Stephen did! This is the type of thing that makes you wonder if certain things happen to certain people for a reason. Yes, I know it's horrible to do this to your child - says the universe - but I know you have the resources, knowledge and drive to help him and through that so many other children. And the Damiani's and their team have. They identified Massimo's variation. They have developed treatments that help. They have a little boy they expected to be dead by 2 going to school. They have saved other parents the anguish of not knowing exactly what is wrong with their child. They have proven the importance of genomics in diagnosing rare illness.
Cracking the Code is at it's very heart a feel good story. The triumph of hard work and determination and love. The Damiani's and Massimo have a long way to go, but their journey so far is well worth reading about.

Cracking the Code gets 3 stars