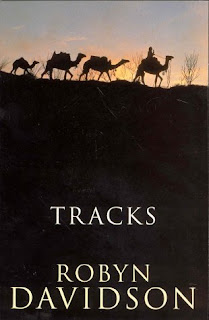 I read this for our Book Group. Well, to be honest, I read most of it and then skimmed the last 60 - 70 pages.

In  1977 Robyn Davidson trekked across Australia from Alice Springs to the west coast with camels. The two years prior to this was spent in and around Alice Springs, learning about camels and equipping herself for the trip.

I would like to say I admire the woman for what she did, but I don't. I didn't like her and while traipsing across harsh desert country is hard work, her attitude towards other people and her apparent dislike of what she is doing just didn't endear her to me. In fact, several things confused me.

For a start, she continually goes on about how she wants to be left alone, to trek by herself, yet when she is by herself she seems to be miserable, prone to bouts of depression only to become happy when staying for awhile at a station or settlement.

She meets and learns how to handle camels from a man who is abusive and sadistic. She continues to allow him to treat her in the most horrendous way and continually refuses to take any responsibility for staying and allowing him to. I know about battered wife syndrome, I know it can be hard to walk away from someone you love who is not good for you, but she didn't even like this man! He had no hold on her, yet she stayed!

Davidson also took a sponsorship deal from National Geographic. In fact without the sponsorship it is unlikely she would have been able to buy the equipment she needed.  The deal was for articles written by Davidson and a photographer to join her on several sections of the track to take photos. She resented this immensely and at times was, to my mind, incredibly rude to someone who helped her secure the sponsorship and was just trying to do his job. His sin, as far as I can work out, was to not be as into the whole experience she was. He wanted to get his photos and then move onto his next job. Really how dare she!

I also have issues with how she discusses the aboriginal population and their treatment, however, this became less of an issue as I continued to remind myself of when the book was written. However, her tone is condescending and patronising.

Many of the reviews I looked at on Goodreads had a problem with the violence towards the camels as well. Now I'm not an expert on camels, but I am sure there has to be a better way to teach a camel whose boss that to tie it to a tree by its legs and then proceed to beat it with a bit of wood until it breaks and then use an iron bar. (I kid you not) I get the animal charged, I get that it was in a rage, but it was tied to a tree by the legs!

Really, without the motivation of book group, I would not have gone past the first 50 pages. Definitely not one I will be recommending!
Posted by Unknown at 10:08 AM