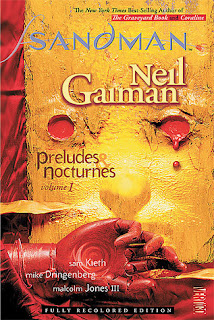 From Goodreads: New York Times best-selling author Neil Gaiman's transcendent series SANDMAN is often hailed as the definitive Vertigo title and one of the finest achievements in graphic storytelling. Gaiman created an unforgettable tale of the forces that exist beyond life and death by weaving ancient mythology, folklore and fairy tales with his own distinct narrative vision.
In PRELUDES & NOCTURNES, an occultist attempting to capture Death to bargain for eternal life traps her younger brother Dream instead. After his 70 year imprisonment and eventual escape, Dream, also known as Morpheus, goes on a quest for his lost objects of power. On his arduous journey Morpheus encounters Lucifer, John Constantine, and an all-powerful madman.This book also includes the story "The Sound of Her Wings," which introduces us to the pragmatic and perky goth girl Death.

Thoughts: I have a love/hate relationship with graphic novels - I either love them or hate them. Maus was brilliant, The Exile terrible. Whenever you look at lists of graphic novels to read, Neil Gaiman's Sandman rates within the top 3, often as number1. Gaiman has been a relatively new discovery for me, no more than 12 months. I'm still reading him thinking "Dude, where have you been all my life!"
My first indication that Sandman was good - it took me more than a day to read. There was a real, intriguing story to follow. There were characters I cared about, characters I really didn't like and being able to raise that kind of feeling in only a few words - your words have to be good. The second indication it was good is the fact I put volumes 2 & 3 on hold at the library before I finished one. Third indication, I put other things aside to read it.
For me, the pictures in a graphic novel are secondary. If the storyline isn't good, it doesn't matter how good the pictures are. The words still tell the story and without them everything is lost. Gaiman tells a good story. He leads you through the story, literally leading you to hell and back. And his version of Death - not a s funny as Pratchett's but every bit as inspired. If you want to explore graphic novels, enjoy the fantasy/ horror genre there would be worse places to start. Gaiman is a true story telling genius regardless of format.