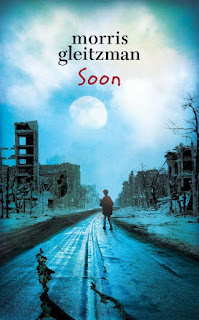 From Goodreads: After the Nazis took my parents I was scared. After they killed my best friend I was angry. After I joined the partisans and helped defeat the Nazis I was hopeful. Soon, I said, we'll be safe. I was wrong.
Soon continues the incredibly moving story of Felix, a Jewish boy still struggling to survive in the wake of the liberation of Poland after the end of World War Two.

Thoughts:  There was Once, followed by Then and Now. A little bit after that, there was After and now there is Soon. Gleitzman doesn't call this a series of books, he calls it a family of books. The order I have listed them in is the order they were published in. Chronological order puts Now at the end. Read them in published or chronological, you're in for an experience either way.
The war is over, so everyone should be safe, you should be able to go back to building a normal life. The story is over, right? Everything will be a-ok. Nice theory, reality however, is very different.
Felix, who has survived so much still has a ways to go. Gleitzman has continued where so many have stopped. He has shone a light on them continuing persecution of  those already so badly damaged by the Nazi's. Soon see's Felix and Gabriek surviving by repairing things people need.  They trade their skills for food, supplies and money. Felix still dreams of being a doctor and does what he can to help. They try to keep things simple, but sometimes things just get complicated.
There are several things I love about this family of books. Despite the subject matter they are full of hope. Felix never seems to lose that drive to do good, to see people in the best light possible, to try and understand their motivations. What's even better is he continues to find others who share this hope, who are willing to help, although often with a little more caution than Felix. At the same time Gleitzman doesn't hide the brutality of the time. People die, people do mean and nasty things and life is really, really hard.
My 13 year old has read this whole series - devoured them. It's been a great jumping off point for some fantastic discussions, good history and social justice lessons. This is a series well worth reading.