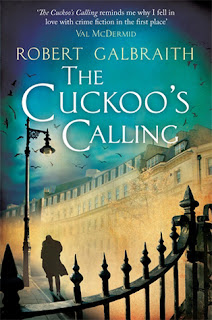 From Goodreads: A brilliant debut mystery in a classic vein: Detective Cormoran Strike investigates a supermodel's suicide. After losing his leg to a land mine in Afghanistan, Cormoran Strike is barely scraping by as a private investigator. Strike is down to one client, and creditors are calling. He has also just broken up with his long time girlfriend and is living in his office.
Then John Bristow walks through his door with an amazing story: His sister, the legendary supermodel Lula Landry, known to her friends as the Cuckoo, famously fell to her death a few months earlier. The police ruled it a suicide, but John refuses to believe that. The case plunges Strike into the world of multimillionaire beauties, rock-star boyfriends, and desperate designers, and it introduces him to every variety of pleasure, enticement, seduction, and delusion known to man.
You may think you know detectives, but you've never met one quite like Strike. You may think you know about the wealthy and famous, but you've never seen them under an investigation like this.

Thoughts: So this review will be in two parts. Part one will be the actual review. Part two will be some commentary on authors using pseudonyms.
This is easily the best detective novel I've read in a long time. Good quality writing, great storyline and a detective who, while having a few issues, is not your stereotypical wreck of a man, battling his demons, recovering or existing alcoholic. Cormoran Strike has faults, he knows what they are and he is dealing with them. Check your pity (self or otherwise) at the door and just get on with what you're paid to do.
Strike made this book for me. He felt like someone I could respect and who I would hire to do a job for me. He approaches the investigation logically, no gun ho, let's take a chance and see if it works out manoeuvres. Each step is carefully thought out and followed through. As a result, you can believe the tale that is told. You get a good, clear picture of each character and what they are like. As a reader you trust Strike and his analysis or portrayal of the other players in the story. At the same time Galbraith (or Rowling if you prefer) keeps the story moving at a respectable pace. It doesn't drag, but every discovery is believable and doesn't ask you to stretch your suspension of disbelief to breaking point. Excellent book and if you are a fan of this genre, highly recommend you check it out.

As for the pseudonym thing...I hate them. I know there are various reasons for authors wanting to use pseudonyms, but for the most part I feel they are bullshit, especially when a well known author releases a new book under a different name and when it doesn't do as well as they want, lets it slip who really wrote it. If what you are after is book sales, then just use your name. If you want to see if your books will still be critically acclaimed regardless of the name on  the cover, then I would suggest you don't actually know how the book world works as well as you should. According to Wikipedia, over 300,000 books were released in the USA in 2013. Now I don't know if that was US titles only, or includes titles from other countries, but it's a hell of a lot. Very few of those would have made best sellers lists. The NY 2013 Best Sellers list on Goodreads list 150. That's less than 1% of all titles - easy to miss yours, even if it is a brilliant book.
Part of my dislike comes from my job. When many of these books are rereleased with the well known authors name on it, they end up looking like this: 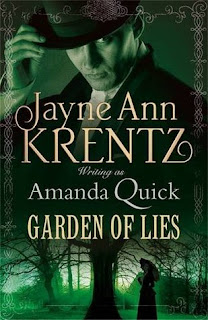 At first glance, you assume it's been released by Jayne Ann Krentz, but it's actually Amanda Quick who is the official author. Book should be shelved as Quick, frequently found in with Krentz. It's in the catalogue as Quick, so if it's mis-shelved as Krentz, it's kind of hard to locate, unless you know it's a pseudonym. But what about the spine label hear you say, surely you just refer to the spine label. Except many of the bigger library services no longer use spine labels on their fiction books. No need, everyone knows fiction books are organised alphabetically by author. Whether you agree with this is not, it's a reality, so no spine label. So it's easy to mix up who the author is, especially when the pseudonym is printed smaller than the better known author.
I'm slightly more forgiving of people like Rowling's who at this point anyway, has felt no need to splash her actual name across the Galbraith covers, but I still don't get the motivation for a pseudonym. I I love Rowling's writing - Harry Potter, Casual Vacancy and now this. One of the things I love the most is her versatility, the fact that each of these books are different from each other but still so good. If the concern is people won't read it because of the name, more fool them. You're still more likely to reach more people with the Rowling name than the unknown Galbraith. In the end I think a pseudonym proves nothing but your own insecurity as a writer.
It's not a big thing,  but it is something that irks me. I don't get the pseudonym thing, just don't.

In the end, I loved the The Cuckoo's Calling. I will be reading the second book, I just hope Rowling isn't struck by a sudden need to have her real name take centre stage on the cover. What's your thoughts on the pseudonym?

The Cuckoo's Calling gets 4 stars