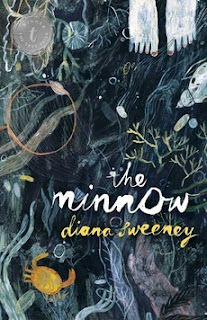 From Goodreads: Tom survived a devastating flood that claimed the lives of her sister and parents. Now she lives with Bill in his old shed by the lake. But it’s time to move out—Tom is pregnant with Bill’s baby.
Jonah lets her move in with him. Mrs Peck gives her the Fishmaster Super Series tackle box. Nana is full of gentle good advice and useful sayings.And in her longing for what is lost, Tom talks to fish: Oscar the carp in the pet shop, little Sarah catfish who might be her sister, an unhelpful turtle in a tank at the maternity ward. And the minnow.The Minnow is a moving and powerful coming of age story with a whimsical element that belies the heartbreaking truth of grief and loss. Tom is a character you will never forget.

Thoughts: This is the fifth of the Children's Book Council of Australia (CBCA) shortlisted Older Readers books. Wow. I loved this. I don't think I have ever read a YA book like this before.  I think I've read a few that tried to be like this and totally missed the mark, but this hit it full on.
Tom is a 14 year old girl in very difficult circumstances. She lives in a small community devastated by a flood that killed many, including Tom's parents and sister. Tom has been living with Bill, but moves in with her friend Jonah when she finds herself pregnant by Bill, who is much older and obviously involved in something shady.
The author's use of short sentences was very effective. To me it gave a feeling of Tom being slightly disconnected from everything around her. Finding herself pregnant should have been traumatic, but Tom just accepts it as part of her lot. She seems to move through the world slightly apart from it all. She has wonderful conversations with her dead grandfather, various animals and the minnow - the child growing inside her. Her ease with this makes you feel like the veil between the real world and the netherworld is very thin for Tom. In fact her ease with it may mean it takes you awhile to work out who is living and who isn't since it's all the same to Tom.  This shows you this is nothing extraordinary, that it's just the way Tom is and that's OK.

I was slightly uncomfortable with the fact it appeared to be perfectly OK and acceptable by this small community for Tom to live with Bill and then for Tom and Jonah to live together despite their young age. No social workers turned up to assess a girl who had lost her whole family, was pregnant in suspect circumstances and wasn't attending school. But then it occurred to me there was no date given. Apart from the fact they drive cars and have TV, there is no indication as to when the story is set. It's quite probable in earlier years there would have been little or no intervention.
I can see The Minnow being a very polarising book - you will either love or hate it. For me it's uniqueness alone is enough. It's definitely a book for the older end of older readers with many of the concepts and ideas simply being beyond younger readers.

The Minnow gets 5 stars.