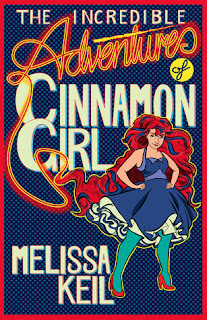 From Goodreads: Alba loves her life just as it is. She loves living behind the bakery, and waking up in a cloud of sugar and cinnamon. She loves drawing comics and watching bad TV with her friends.
The only problem is she’s overlooked a few teeny details:Like, the guy she thought long gone has unexpectedly reappeared.And the boy who has been her best friend since forever has suddenly gone off the rails. And even her latest comic-book creation is misbehaving.Also, the world might be ending – which is proving to be awkward.As Doomsday enthusiasts flock to idyllic Eden Valley, Alba’s life is thrown into chaos. Whatever happens next, it’s the end of the world as she knows it. But when it comes to figuring out her heart, Armageddon might turn out to be the least of her problems.

Thoughts: This is the fourth of the Children's Book Council of Australia (CBCA) shortlisted Older Readers books. I will admit this is the title and cover and I was most dubious about - truthfully it's not something I would have naturally gravitated to. I would have missed out. This is a true gem. What's more, a quick scan of it's reviews on Goodreads and it seems to be connecting with it's audience as well. Keil has avoided so many of the young adult cliches - no love triangle, a female protagonist who has curves and an positive body image and a supporting cast that are believable and great characters in their own right. Alba and her friends are having their last summer before they scatter or stay. Everyone seems to be fairly certain what they want to do, where they want to go. Alba thought she knew, but now she's not so sure.  I'm sure it's a feeling many young people have when they finish school - what now? Is what I want to do really what I want to do or just what everyone thinks I should do?
Alba is an incredible character. She is sassy, smart, talented and sure of herself. She is a fantastic teenage female character and there should be more of them. Cinnamon Girl does sneak up on you. The book just grows in strength with each chapter until by the end you are blown away with how natural it all feels. The characters have become your friends and you want to find them and ask how they are doing. Fabulous book and my front runner to take out the top prize.