The Alloy Of Law 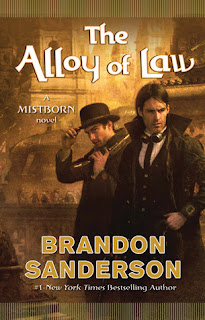 From Goodreads: Three hundred years after the events of the Mistborn trilogy, Scadrial is now on the verge of modernity, with railroads to supplement the canals, electric lighting in the streets and the homes of the wealthy, and the first steel-framed skyscrapers racing for the clouds.
Kelsier, Vin, Elend, Sazed, Spook, and the rest are now part of history—or religion. Yet even as science and technology are reaching new heights, the old magics of Allomancy and Feruchemy continue to play a role in this reborn world. Out in the frontier lands known as the Roughs, they are crucial tools for the brave men and women attempting to establish order and justice.
One such is Waxillium Ladrian, a rare Twinborn, who can Push on metals with his Allomancy and use Feruchemy to become lighter or heavier at will. After twenty years in the Roughs, Wax has been forced by family tragedy to return to the metropolis of Elendel. Now he must reluctantly put away his guns and assume the duties and dignity incumbent upon the head of a noble house. Or so he thinks, until he learns the hard way that the mansions and elegant tree-lined streets of the city can be even more dangerous than the dusty plains of the Roughs.

What I thought: So this is the second last book in my library challenge that was due to end on June 24. You will have to wait for my next review of the last book to find out if I made my deadline!
I loved Sanderson's Mistborn Trilogy. He was by far and away the most original fantasy writer I have read in a long time. It always worries me though when a trilogy author comes out with a fourth book - I mean, if they can't count, what hope do they have! So you can imagine I approached this with trepidation. I was greatly relieved to read in the introduction, this paragraph:

I wanted to move away from the idea of fantasy worlds as static places where millennia would pass and technology would never change. The plan then was for a second epic trilogy set in an urban era and a third trilogy set in a futuristic era - with Allomancy, Feruchemy and Hemalurgy being the common threads that tied them together.
This book isn't part of that second trilogy...


Instead, The Alloy of Law is like an off shoot - something I was very pleased to read and while it's no Hero of Ages, it was OK. Still set in the Mistborn world, Alloy of law is far in the future from the original trilogy. There is no huge quest, in fact it was like a western with Mistborn powers! It did end in a way that suggests there be others in this vein and with these characters and that is OK. I will read them if they come, but it's those 2nd and 3rd trilogies that has me really intrigued!