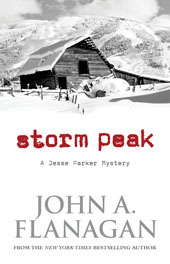 From Goodreads: Jesse Parker, ex-Denver police detective, has returned to his hometown of Steamboat Springs, Colorado, to spend the winter working the ski patrol and taking it easy. But he is reluctantly dragged back into a world of violence and murder when a serial killer begins a killing spree in the sleepy ski town. The town's popular sheriff, Lee Torrens, asks Jesse to help her out with the investigation as the killer continues to stalk the town, leaving little clue as to his motive. Are the murders random acts of a psychopath, or a cold, calculated escalation of terror? As the two friends work together, the embers of an old union reignite, but the growing notoriety of the Silver Bullet Killer brings complications that will shake the foundations of the small town. No-one is safe.

What I thought: I borrowed this from the library when I was looking on the catalogue for other John Flanagan books in the Ranger's Apprentice series. Anyone who has read this blog for more than 5 minutes will know how much I love the Ranger's Apprentice series so I thought I would check out one of his adult books.
Storm Peak was OK. It kept me reading, but didn't set anything on fire. For me it was a pretty stock standard mystery book. There was nothing in it that I wasn't expecting, the characters were nothing new. What the book did have over many mysteries I have read was good writing. Nothing jarred, stood out like a sore thumb. Flanagan obviously knows his stuff in term of skiing and used that to keep the scenarios in the book believable (mostly!) Would I read another of his adult books? Not in  a hurry, but I wouldn't turn one down either.