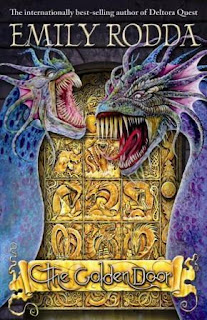 From Goodreads: The walled city of Weld is under attack from ferocious flying creatures that raid in the night, bringing death and destruction. The Warden calls for Volunteers to find and destroy the Enemy who is sending the invaders. The heroes of Weld answer the call one by one, never to return. Rye is officially too young to go, but his brothers are among the lost, and he must find them.

What I thought: This is the third book from the The Children's Book Council of Australia Younger Reader's Short list.
Emily Rodda has long been a favourite Australian children's author. Her Rowan of Rin and Deltora Quest series' are fantastic - a great introduction to fantasy fiction. Once again she has produced an excellent book which promises another wonderful series. It's full of the adventure and action needed to keep children interested. At the same time she has created a world of fantastic monsters, strange people and perplexing characters. Her hero, Rye, is reminiscent of Rowan from the Rin series. A quiet boy - nothing special - who finds himself in the middle of a quest to save his people, and in doing so, finds hidden strengths and talents. My personal feeling is you can't go wrong with a Rodda book. I'm already looking forward to going through the Silver Door.  It will however have to wait until after my library challenge!