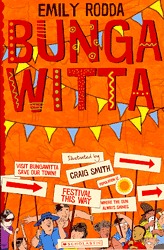 From Goodreads: It's crunch time in Bungawitta. The land's as dry as a dead galah, there's no rain in sight, and only twelve people left in town. Little Glory-Alice blames it all on the TV weatherman. Jay knows better. Nobody can make it rain. But a shower of money would help keep Bungawitta alive. And a festival would attract city tourists with money to spend, Jay's sure of it. But can twelve people, two dogs and a Shetland pony put on a proper festival? Only time, and the ABC, will tell.

What I thought: This is the fifth book from the The Children's Book Council of Australia Younger Reader's Short list, and Emily Rodda's second on the short list - the first being The Golden Door.
Having two Rodda books on the list only serves to highlight her versatility as a writer. Bungawitta is aimed at the younger end of the market, with fantastic illustrations from Craig Smith. Once again Rodda's characters are wonderful and this a lovely read of how a town sets out to save itself from the crippling drought.