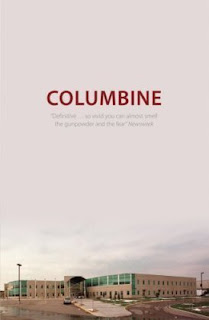 Everyone knows the story of Columbine, right? April 20, 1999 two kids, outcasts in their school, pushed to the edge by bullying, went on a shooting rampage that turned the name of a school into a noun.

Wrong. I will freely admit it, this is what I thought, this is what the media fed us and, while I can't speak for other countries, especially the USA, I am assuming this is what a lot of people continue to think.

Dave Cullen reported on Columbine. He freely admits to helping perpetuate some of the myths surrounding the event. But in this book, he details not only the event and events leading up to it, he shines a light on what was reported, what was suppressed and the fight to make sure people understand exactly what happened at Columbine High.

I will put my hand up to a morbid fascination on things like this. My shelf is full of books on serial killers and mass murderers. What drives someone to do this? How twisted and messed up do they have to be? And what can we do to stop it?

Columbine is not an easy book to read, but it is compelling. Dave Cullen's recreation may not have all the answers, but it definitely allows you to understand that most of the popular assumptions about Columbine, it's victims and it's perpetrators are simply myths.

NOTE: On April 28, 1996, a gun man massacred 35 and injured a further 21 at Port Arthur, Tasmania, Australia. Walter Mikac lost his wife and two young daughters. In his 1997 book, To Have and To Hold, he wrote the following note.

A conscious decision has been made in this book not to print the name of the gunman who perpetrated the dreadful acts of 28 April, 1996 - a campaign begun by the Dunblane parents in a book published in Great Britain in 1997 called Our Year of Tears.
As we prepared the book for publication, we were determined to continue the crusade. This is a story of love and hope with no place for either of these creatures. They do not have a place in history, alongside their victims.

When I first read that note, it struck a chord with me. So often we remember the people who inflicted the pain, but not those who died, or who will forever be affected by their acts. As a mark of respect to those affected by Columbine, I will not type the name of the offenders. And, although I cannot list all those injured physically or mentally by their actions, I will list the names and ages of those who died that day.