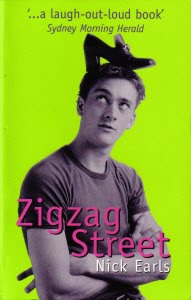 Richard Derrington is twenty-eight and single. More single than he'd like to be. More single than he'd expected to be, and not coping well. Since Anna trashed him six months ago he's been trying to find his way again. He's doing his job badly, playing tennis badly, stalled at the start of renovating and wondering when things are going to change.
Zigzag Street covers six weeks of Richard's life in the house his grandparents built at Brisbane's Red Hill. Six weeks of rumination, chaos, poor judgement, interpersonal clumsiness and, eventually, hope, as he stumbles from one incident to another.
Richard's trying to be a nineties man, longing to be desirable, searching for calm, but things are only getting more out of control. Zigzag Street is his story.

Every now and then I come across an author that I decide to read the whole back catalogue of. At the moment, one of those authors is Australia's Nick Earls. I first came across Earls' writing as a teacher librarian and the stuff he had written for young adults. I found him to be fresh, funny and engaging. I have read a few of his books before, but his first book - Zigzag Street - is one I haven't read before.

I enjoyed Zigzag street, although when my husband asked me what it was about, I did find it hard to come up with an answer! What I really find fascinating is being able to identify certain Brisbane landmarks and suburbs as I read. Richard Derrington lives in Red Hill, I have friends who use to live there! Someone else lives in West End, I was lost in West End only 2 weeks ago!!
Having read The True Story of Butterfish recently, I can see how Earls' and his writing have developed. His characters are older, not necessarily wiser! His writing style is smoother, but  still highly entertaining. I'm looking forward to read more of his stuff.
Posted by Unknown at 3:47 PM