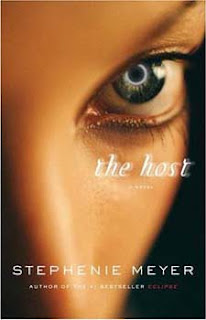 The Host by Stephenie Meyer
From Goodreads

The author of the Twilight series of # 1 bestsellers delivers her brilliant first novel for adults: a gripping story of love and betrayal in a future with the fate of humanity at stake.
Melanie Stryder refuses to fade away. The earth has been invaded by a species that take over the minds of their human hosts while leaving their bodies intact, and most of humanity has succumbed.
Wanderer, the invading "soul" who has been given Melanie's body, knew about the challenges of living inside a human: the overwhelming emotions, the too vivid memories. But there was one difficulty Wanderer didn't expect: the former tenant of her body refusing to relinquish possession of her mind.
Melanie fills Wanderer's thoughts with visions of the man Melanie loves-Jared, a human who still lives in hiding. Unable to separate herself from her body's desires, Wanderer yearns for a man she's never met. As outside forces make Wanderer and Melanie unwilling allies, they set off to search for the man they both love.
Featuring what may be the first love triangle involving only two bodies, THE HOST is a riveting and unforgettable novel that will bring a vast new readership to one of the most compelling writers of our time.

After I read the Twilight series, I said, yep, that was interesting, don't think I will go any further with this author. So I am still trying to work out why I picked up The Host. I think it was the line "her brilliant first novel for adults" (emphasis mine). And here is my first problem with the book - I don't see the audience being any different than the one for Twilight. I suppose I expect an adults book to be a little more challenging, characters with greater depth and a less predictable story line.  I found the characters very two dimensional. I understand the love Mel and Jarad have, (I myself truly believe I have found my soul mate in this life) but the complete utter blind devotion is not real - not even in an invaded world. While they said Jamie had grown up, he continually came across as a 10 year old to me- completely unable to pick up nuances (not that there were many in the book!). None of the characters seem to grow and develop, they were pretty much the same at the end as at the beginning. Some had changed attitudes but they happened to easily and without any real questioning from the characters. My best example of this was Kyle's turn around when he found Jodi. For me, there was not enough of a reason for him to change so dramatically - very unconvincing.
The storyline was predictable. I guessed the ending less than half way through the book. (Spoiler here, highlight the white area if you want to read it.) I I suppose both Wanda and Melanie needed to survive in order for there to be a sequel, which I am assuming there is or will be.

Having said that, I did enjoy most of  the book. It was a good light read, although I got a little annoyed towards the end. I would love to say that if there is a sequel, I won't read it, but I don't make rash promises!
Posted by Unknown at 7:58 AM