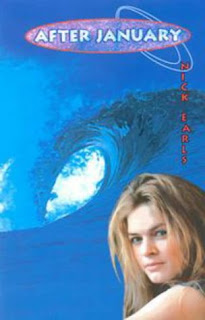 After January by Nick Earls
The second in my reading of Nick Earls' backlist. While this was published the same year as Zigzag Street, it was actually the first book he wrote.
From Goodreads

Alex Delaney is waiting for the beginning of the rest of his life. Marking time till his tertiary offer, he's not expecting much, just the usual holiday in Caloundra. So he's not prepared for the girl with the nose-ring who cuts past him on a wave and draws him into a new way of looking at himself and the world.

After January is basically a coming of age story. While it was nothing that set the world on fire, I found it to be really well written, the characters believable and the story flowed. What I really liked about this book was the lack of overdone teenage angst! I often find with books aimed at a teenage audience the angst is way overdone! Alex was unsure about approaching the girl, but he did and managed to do it without embarrassing himself too much, there was no great misunderstanding that could easily be resolved if they just bothered to ask a question. At it's most basic level, After January is about two people meeting, getting to know each other and expliring how they fit into each others worlds and lives.
Posted by Unknown at 1:30 PM