The Girl Who Kicked The Hornet's Nest 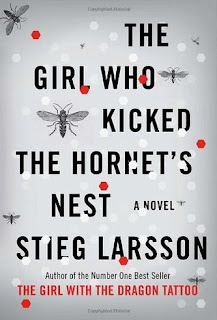 From Goodreads: Lisbeth Salander—the heart of Larsson’s two previous novels—lies in critical condition, a bullet wound to her head, in the intensive care unit of a Swedish city hospital. She’s fighting for her life in more ways than one: if and when she recovers, she’ll be taken back to Stockholm to stand trial for three murders. With the help of her friend, journalist Mikael Blomkvist, she will not only have to prove her innocence, but also identify and denounce those in authority who have allowed the vulnerable, like herself, to suffer abuse and violence. And, on her own, she will plot revenge—against the man who tried to kill her, and the corrupt government institutions that very nearly destroyed her life.
Once upon a time, she was a victim. Now Salander is fighting back.
What I thought: So having sorted the whole Kindle issue, I dived into this as soon as I could. My honest opinion - I think Larsson just got better with each book. It was a bit hard keeping all the players straight, but repeated references to who they worked for (The Section, SIS, Sapo, Milton, Millennium) helped keep me on track. And as with any book translated from another language, the names took a bit of getting use to, especially when a couple of them were similar.

If I have any beef with these books it's the suspension of disbelief you need to employ if you have any knowledge of IT security. (and I do, it's a field my husband works in). I know Lisbeth Salander is suppose to be an absolute genius at this stuff, but the ease with which she gets in, navigates and never gets caught - kinda hard to swallow - and the sole reason I will not recommend these books to my husband - he'd drive me crazy explaining why she couldn't do what she does! Apart from that - great reads and I will be watching the movies!

Challenges: What's in A Name

Today tell me a series which gets better with each book.