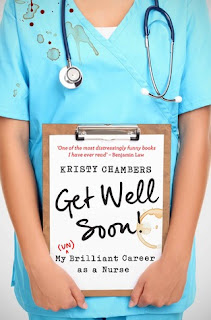 From Goodreads: Falling into the nursing profession, Kristy Chambers spent almost a decade working with a wide range of people, ranging from drug addicts to cancer patients. Dark, humorous, honest, and compassionate, this memoir illustrates the incredible work nurses do and the many challenges they face. A tribute to the wonderfully brave people Chambers met during her career, this book portrays both joyous and difficult experiences.

What I thought: Yet another book I discovered through Richard Fidler's excellent radio program called The Conversation Hour. You can access the audio of the interview here.
I know it's most probably completely politically incorrect to find a book about sick people funny, but this was! Kristy Chambers takes us through her pre graduate placements and her first ward placements, giving us a warts and all view of nursing. It was funny from the first, and very refreshing! Chambers had no great calling to nursing. In fact it came down to choosing between it and teaching and she decided
sick people trumped teenagers.
If your looking for sympathetic, overly concerned politically correct stories about the sick and dying - wrong book!  Chambers is brutally honest about everything including hating some of her patients (the trick is to hide it) and finding body fluids stomach churning and not really her cup of tea. In fact, I can imagine some people being offended by the off hand way she talks about some diseases.

And even though though throwing up was definitely not my idea of a good time, the bulimic at least got to have a bit of fun first, eating everything before they did whatever ugly, cut-throat shit was necessary to get rid of it. I thought I would choose their tribe if pushed.  Chapter 1 Anorexiaville p.9

And then she shows you a side that made you realise she did care about her patients and sympathised with them.

So I had some of the same hang-ups, perhaps, but luckily, I fell far short of the extreme examples before me. It was not inevitable that I would have early onset osteoporosis, or be rendered infertile. ...I didn't have hard calluses on the back of my hands from shoving them down my throat 50 times a day, from throwing up water, and I didn't want to disappear. These girls were winning at losing, dying right in front of your eyes. Chapter 1 Anorexiaville p.12

In fact the tone of the book reminded me of the way as a teacher we would speak about kids in the staffroom on a Friday afternoon after a hard week. You'd say things you would never, ever say outside the staffroom, using words you would never, ever say normally (stupid, idiot, little shit) , but also needing to debrief. I would assume a lot of what Chambers says is the same that nursing stuff say all the time in the safety of a staffroom, knowing what's said in the staffroom, stays in the staffroom.
Chambers makes no apologies for her attitude, although she does make sure the reader knows that a lot of what she says in her head is never heard by the patient. What they see and hear is a professional nurse whose job is to care for them, clean them up and hold their hand - no matter how rude and terrible they are to her.

Get Well Soon is what I imagine nursing to be like - warts and all. I would suggest NOT eating while reading it, but would completely recommend it to anyone who wants to know what nursing is really like.