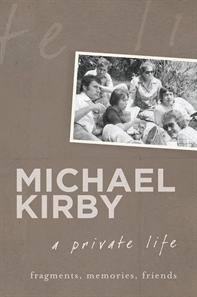 From Goodreads: Michael Kirby is one of Australia's most admired public figures. At a time of spin and obfuscation, he speaks out passionately and straightforwardly on the issues that are important to him. Even those who disagree with him have been moved by the courage required of him to come out as a high-profile gay man, which at times has caused him to be subjected to the most outrageous assaults on his character.
This is a collection of reminiscences in which we can discover the private Michael Kirby. It allows the public figure speak in his own voice, without any intermediary. He opens up as never before about his early life, about being gay, about his forty-two year relationship with Johan van Vloten, about his religious beliefs and even about his youthful infatuation with James Dean, which sent him on a sentimental journey to Dean's home town in the year 2000, an adventure he here wryly recalls.
Beautifully written, reflective and generous, in that warm and gently self-deprecating voice that is so characteristic of him, this is a memoir that Michael Kirby's many admirers have been waiting for.


What I thought: This is our book group book for this month and I think we are on a winner! Justice Michael Kirby is a well known and respected name in Australia. As the blurb above says, he is renown for his plain speaking and passion. This memoir is not lineal, instead Kirby has written on things he is passionate and interested in - growing up homosexual in the '50's, AIDS, his beautiful relationship with his long term partner and James Dean! Kirby has this wonderful ability to take an issue and put in terms that make it so obvious the way things should be - he uncomplicates the complicated.

One can intellectully embrace an idea of celibacy as the path that society seemed irrationally to enforce on people like me. But in the midst of the loneliness, the nagging, demands of the body and mind, the heart would urge the spirit to look for what the law, religion and society forbade.


I referred to the archbishop's statement reported in the newspapers that day* and gave my own point of view. The boys looked and listened quietly. I told them to have nothing to do with hate speech -'poofter', 'faggot' - or with gay bashing, bullying and harassment. I suggested that a life of celibacy was not a pratical solution for homosexual people...But those who condem and demand silence in the years of youth must wear the moral burden of the family rejections, suicides and the despair that the world of shame and silence brings.


*The Roman Catholic Archbishop of Sydney had released a statement  condemning the Gay and Lesbian Mardi Gras [he said] the Church 'teaches that homosexual practices are contrary to the moral law' so that homeosexual people 'are required to exercise self-discipline and avoid such conduct.' They are, he believed, called to a life without sex. The Anglican Archbishop was contacted for comment and endorsed the statement.

One of the things I admire most about Kirby is his unwillingness to compromise his principals. Asked by a Catholic boys school to give a talk on 'judical activism' he explained it was more of a topic for politicians and suggested the alternative of homophobia. The school came back with a suggestion of social justice which Kirby agreed to, making sure they understood he would use social justice as a context for homophobia. But while he was happy to talk on this point, he refused to ambush the school, providing a copy of his talk points to a master at the school so they would be fully aware of the direction he was taking. The talk was a resounding success, the boys asked pertinent and thoughtful questions. Kirby's answers were just as thoughtful and respectful. The majority of parents approved, with several writing letters to thank Kirby for his talk. A similar situation happened with a talk Kirby presented at a Salvation Army Conference.

This is an excellent book for book groups, it's bound to provoke lots of interesting discussion. I'm looking forward to our meeting this month!