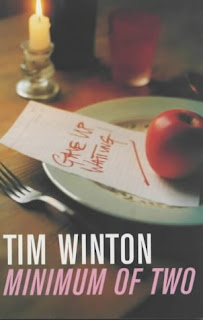 Love, love, love Tim Winton! I've always thought it would be great to hear a Tim Winton book read out loud so when I discovered the library had this on audio book, I had to get it.

And I was right. Winton's style of writing lends itself beautifully to being read out loud, although I wasn't thrilled with the voice of the narrator. At times he just seemed to get the tone wrong. However, Winton's stories over-rode that small annoyance.

Minimum of Two is a collection of short stories, although the majority of the surround the story of Jerra, Rachel and Sam. The last story in the book which was based around Sam's traumatic birth was incredibly powerful and moving.

My pick of the stories though is the one that lent it's name to the title of the book: Minimum of Two. This was the story of a husband trying to deal with the rape of his wife. As I listened, I realised how wrong the husband had got it. That the rape and how the release of the man convicted of it was not about him - the husband. He totally failed to see it was about his wife and while he had been affected by the event, it had not happened to him and what he did in order to "make it better" did in fact, make it a lot worse.

I have said before that Winton is my favourite author. The fact he is Australian is even better. I highly recommend his books to anyone, although if you a little wary of bizzare stories, go for one of his later books such as Breath or Dirt Music.
Posted by Unknown at 1:57 PM