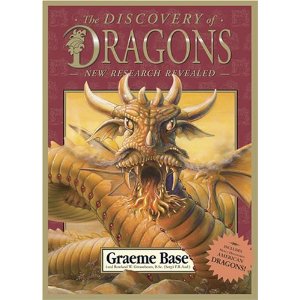 Title:
The Discovery of Dragons
Published:
1996
Awards:
none


When Graeme Base first met his publisher, he had an idea for a book about Dragons. In fact, a field guide to dragons. His publisher suggested an book based on something Australian would be a better idea and so My Grandma lived in Gooligulch was born and the dragons were shelved. Fast forward to 1995 and several books later and the publisher was interested in revisiting the dragon idea. The end result was The Discovery of Dragons.
The Discovery of Dragons is a series of letters from 3 explorers who discover dragons. Bjorn of Bromme writes to his cousin Olaf of several dragons discovered in Europe, Soong Mei Ying writes to her father in regards to several Asiatic Dragons and Dr E. F. Leibermann writes to his fiancée, Prunella Hapsburgernfries about the tropical dragons he finds. 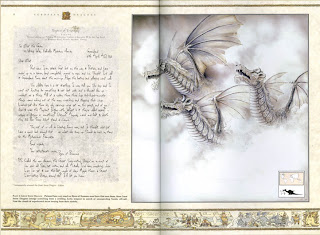 In true Base style, the illustrations in this book are incredible. Along with the letters, there is a full colour illustration of each dragon, along with a map of where they are found and a size comparison. Along the bottom of each page is a cartoon style summary of the letter which is quite hilarious. The letters play for laughs as well. For example, Bjorn writes to Olaf:
I know you're not going to be too pleased about this, Olaf, but me and Sigurd thought we might just pop down to Portugal or Spain since we're over this way - catch some rays, then head across to the south of Gaul for the summer. Good luck with the Rampage. I'll be thinking of you. 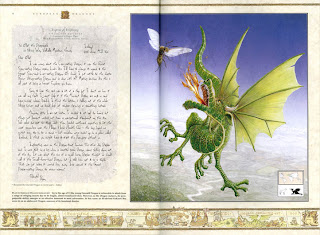 Soong Mei Ying writes:
But I soothed it by softly playing my lute. (How thankful I was that my clever father had insisted I persevere with music practice, despite continual objections from myself, the neighbours and most of the local dogs.)
The Discovery of Dragons is a beautiful book, as you would expect from Base. At no point during the whole thing do you break from the idea that this is real. Real people wrote these letters and out there somewhere, there are dragons just waiting to be discovered.
Links to other Graeme Base books I am looking at can be found here.
The official Graeme Base website can be found here.
Posted by Unknown at 7:45 AM