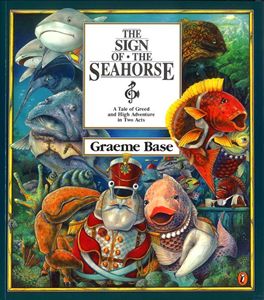 Title:
The Sign of the Seahorse
Published:
1992
Awards:
None


The front cover of this says A Tale of Greed and High Adventure in Two Acts and it's not lying!  I was not surprised to read that he planned for it to become a musical as the story, the verse and the characters just lend themselves to it. In 1998 Melbourne's Playbox Theatre Company and the Melbourne Symphony Orchestra did a concert version of the book. There were plans for a movie as well, but that has yet to come to fruition. I hope it does, it would be spectacular!
Sign of the Seahorse tells the story of the residents of Reeftown. All the seahorses have disappeared, but there are still plenty of fish and crustaceans to frequent The Seahorse Cafe.  It's here that Pearl Trout and Bert, a corporal in the Soldiercrab Army fall in love. Pearl's father owns the Seahorse Cafe and her brother, Finneus has taken up with the Catfish Gang. Unfortunately Gropmund G Groper, a local thief, con artist and all-round baddie, strong arm's Mr Trout into selling him the Cafe, leaving the Trout's out on the street.
In the meantime, something is killing the coral and the Soldiercrab Army are tasked with finding and stopping the poison. the Catfish Gang stumble upon Groper's evil plans for the reef and it's up to Finneus to find the Soldiercrab Army and let them in on the plot. Can Pearl find a new, clean reef for them to live on, will Finneus find the Soldiercrab Army in time and will they be able to stop the poison that is killing the reef. 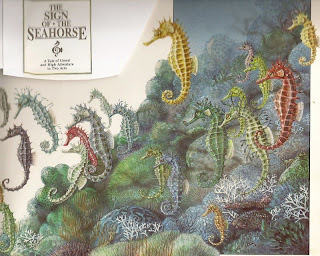 In true Base style, there are things hidden in the pictures of this book. Apparently somewhere in the book, the number 42 appears twice. This is the clue to find 42 hidden, stylised seahorses in the picture. All the hidden seahorses look like the one on the front cover, under the title. Some are rather obvious, like on the sign of the Seahorse Cafe, others are more hidden. 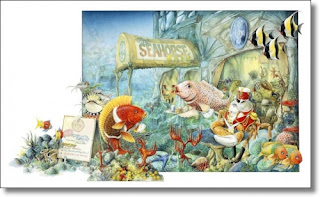 While once again, I found Sign of the Seahorse a captivating and original book, I did feel that at times the verse did not flow and was forced to fit the story. This however is a minor detail and may have to do with how I read it! For me, Sign of the Seahorse was the first of Base's books where he attempted to make the story as complicated as the pictures and it worked well. 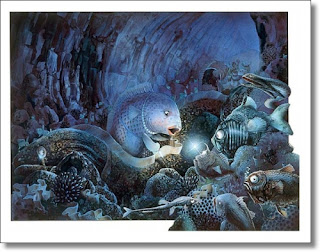 Links to other Graeme Base books I am looking at can be found here.

The official Graeme Base website can be found here.
Posted by Unknown at 6:45 PM