Post Secret and The Secret Lives of Men and Women 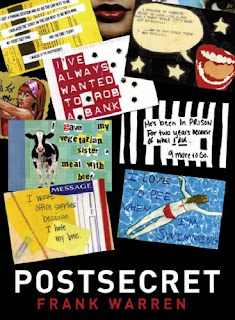 The Secret Lives of Men and Women by Frank Warren

In November 2004, Frank Warren printed 3000 self-addressed postcards with the following information on them

You are invited to anonymously contributer a secret to a group art project. Your secret can be a regret, fear, betrayal, desire, confession or childhood humiliation. Reveal anything - as long as it is true and you have never share it with anyone before. 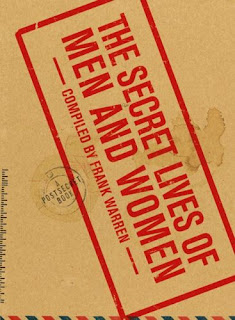 The postcards he got back he scanned and placed on a website - www.postsecret.com. After a few weeks, he stopped distributing postcards, but they kept coming. Now every Sunday, Frank posts a selection on the website.

I've followed the website for about two years now. I can't remember how I found out about it, but it is truly a highlight of my week. Over th years, several books of secrets have been published and this is two of them.

I don't think there is a secret in the books that didn't touch me somehow - whether it made me laugh, cry or squirm. Below are some of the secrets shared

I believe that one day I will like myself.

When I was 3 my dad liked me to brush his thick red hair. One dya he asked and I said I didn't want to. I never saw him again - he went away and then he died...I am 65 and some days I  still think it was my fault.

I thought you were a good lover. Now I know better...

I love to pee when I'm swimmng

Every year on June 4th I slow dance alone to the same song...while pretending to hold the baby I miscarried.

Every time I'm alone in an elevator I take the opportunity to pass gass, pick my nose and adjust my bra.

Dear Frank,
I have made six postcards all with secrets that I was afraid to tell the one person I tell everything to, my boyfriend. This morning I planned to mail them, but instead I left them on the pillow next to his head while he was sleeping. Ten minutes ago he arrived at my office and asked me to marry him. I said yes.