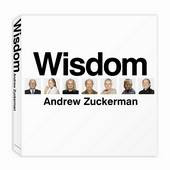 Wisdom by Andrew Zuckerman
My mother actually bought this for me last Christmas and apart from the occasional dip, I haven't really read it.
Andrew Zuckerman recorded the  thought and ideas of 50 prominent writers, artists, designers, actors, politicians, musicians, religious leaders and business leaders. All of them are over 65 .
It's likely to sit on my coffee table and be read slowly so there will be another, more portable read as well. Just don't know what yet!
Started: 7/1
Finished: 18/1
What an interesting read. To read the thoughts of 50 people who have lived interesting and challenging lives is incredibly inspiring. I've taken to posting a quote each day from the book on my Facebook page! Some people have full on essays. A whole page of their thoughts on wisdom, their lives, how they got to where they are and where they want to go now. Others provided a line or two. For me, the best way to express this book is with a series of quotes from it.
Nobody can teach me who I am. - Chinua Achebe
Watership Down was never intended to be a parable or an allegory. As far as I'm concerned, it's just a tale about rabbits. - Richard Adams
You have to be taught to hate . - Dave Brubeck
If you put very few things on a page, you leave lots of room for the imagination. - Dick Bruna
Generosity overpowers greed. - Bryce Courtenay
Children can change the world. - Jane Goodall
A good head and a good heart are always a formidable combination. - Nelson Mandela
I learned that to humiliate another person is to make him suffer an unnecessarily cruel fate. - Nelson Mandela
Overcoming poverty is not a gesture of charity. It is an act of justice. It is the protection of a fundamental human right. - Nelson Mandela
Nowadays being famous is almost a lifestyle, it's almost a career. Kids grow up thinking "I'll be a celebrity." That kind of empty celebrity and the fame that might follow is dangerous. It's celebrity without substance. - Michael Parkinson
You're travelling on a liner and you're travelling cheap, and you look down on the first-class people all having a marvellous time, having drinks and the rest of it, and you think, "Gosh,here I am stuck on this horrible little deck." But if you fall overboard, that deck would look like heaven, wouldn't it? It's entirely point of view. Perspective. - Rosamunde Pilcher
Each one of us can be an oasis of peace. - Desmond Tutu
Posted by Unknown at 1:44 PM