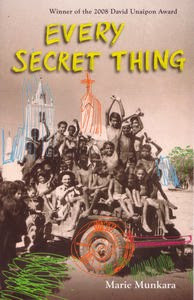 Every Secret Thing by Marie Munkara.

I'm reading this for book club. Only pages in and it has already made me laugh out loud several times (can be embarrassing on the ferry!) A friend who has read it already told me I will cry as well. This is the story of a catholic mission in the Northern Territory and their often vain attempts to convert the local bush mob. My favourite part so far is when a child asks the bishop this question about the serpent in the garden of Eden.

"But why did Eve eat the apple? Wouldn't the snake have tasted better?" queried Jeremiah
"And why aren't there any black angels? Why are they always white?" asked another.
"And if God made the world, then who made God?"
"And why is his name dog backwards?"
His Most Anxious, head spinning from this onslaught, looked to Sister for assistance. But Sister, harbouring a long-held contempt for his Most Sleazy and having borne the brunt of similar questioning herself, continued to clean up her desk and ignored him.
"Er, well, the snake might have been poisonous, " he proffered.
"Poison snakes don't clomb trees!" Ruth flung back amid murmers of assent from the rest of the class.
"Well how do you know that it lived in a tree?"
"Look here," said Cecilia, showing him their text with a beautifully illustrated depiction of Adam and Eve being shamefully ousted from the Garden of Eden while the snake leered at their retreating backs from a nearby bush.


I must warn you (and it's most probably fairly obvious from the above passage) the book is not exactly complimentary to the Catholic chuch.


I have also managed to squeeze in another book.

The True Story of Butterfish by Nick Earls.
I first came across Nick Earls in my role as a teacher librarian and his young adult books. Very rarely have I found a young adult author whose adult books are just as good. I'm fairly sure it was a passage from Bachelor Kisses that had me laughing so hard I could hardly breath. Butterfish is the story of one half of once highly successful band and his return to Brisbane and a "normal" existence. It was hard not to draw parallels between Butterfish (the name of the band) and Savage Garden. One band member very out there and appearing to love the hype, the other more reserved and wanting to stay in the background. Two hugely successful albums, followed by a band break up. Earls himself acknowledges the similarities, but assures us that's where it ends. Hmm, think I may have to add Nick Earls to my list of authors to read all of!
Posted by Unknown at 1:09 PM