The Boy in Striped Pyjamas 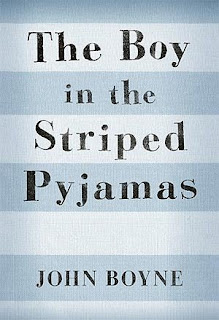 The Boy in Striped Pyjamas by John Boyne

Review: I first read this book a few years ago and actually threw it across the room when I got to the end. I almost did it again, but I was on the ferry and so resisted the urge.
Bruno's father is a very important man. He's not sure what his father does, but after the Fury came to dinner and everyone started calling his father Commandant, they had to move away from their house in Berlin and go to Out-With. Here, Bruno walks along the fence one day until he finds Shmuel, a little boy the same age as Bruno who lives on the other side of the fence. Thus begins a friendship with far reaching consequences.
The Boy in Striped Pyjamas would be a great way to open up discussion with children - especially those around the 10-12 age group about the holocaust and the events surrounding it. The ending is not pretty - in fact it is pretty confronting. Bruno is incredibly innocent and at times comes across as extremely naive, even for a 9 year old. He has absolutely no idea what goes on behind the fence, or why he and Shmuel can't play together like normal kids. It's a book I'd love to do with a class - although it would have to be a year 6 or 7 group, towards the end of the year and with parental involvement.  It has been made into a movie, which I would like to see, just to see how closely they stick to the story.
Posted by Unknown at 7:40 AM