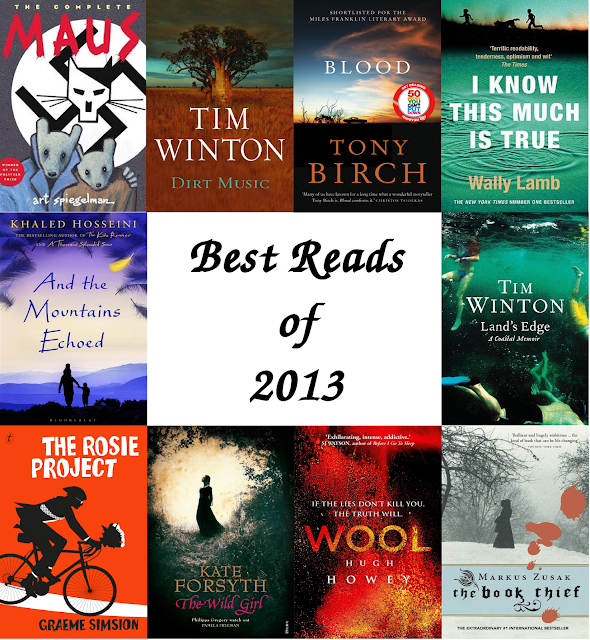 2013 was a good year. In fact it was hard to whittle it down to just 10 books, but those above, in no particular order, are my best reads of 2013. Below you can find links to my reviews of each of these books.

Blood - Tony Birch
Birch was a new author for me. I desperately wanted to read his books after listening to an interview with Richard Fidler. I also really enjoyed his two books of short stories - Shadowboxing and Father's Day.
Recommended for: those who love a good, gritty, Australian read.

Land's Edge - Tim Winton
My love for Tim Winton continued this year with this previously undiscovered gem. Land's Edge is Winton's memoir of growing up and holidaying on the WA. Through this book he explores his love of the ocean and the importance of it in his life.
Recommended for: any one who had part of the coast as their childhood or those who want to get a feel for the effect a landscape can have on one man.

The Book Thief - Markus Zusak
Love, love, love this book. This is one that springs to mind when people ask for a good read.Zusak's tale of a girls life during World War II and the relationship she forms with her foster parents, a hidden Jew and a boy who becomes a friend for life is mesmerising. Told from the point of view of death, you get to see all. Bound to become a classic.
Recommended for: everyone. Despite knowing a few who have not enjoyed it, I would recommend everyone at least give it a go.

Wool - Hugh Howey
I love Dystopian novels, but am finding it harder and harder to find original and interesting ideas. (YA fiction seems to be flooded with a lot of very bad dystopian at the moment - but like the vampire craze, I'm sure this too will pass!) This was fabulous. After an apocalyptic event, humanity has retreated to a silo. Each level with it's own role and no one able to step foot outside. But things are not always what they seem.
Recommended for: Disillusioned Dystopian readers or those who enjoy the genre.

I Know This Much is True - Wally Lamb
Every time I read Wally Lamb I fall in love with his language and his story telling. I continue to make my way through his back catalogue, finding each book more and more wonderful. He released a new title in 2013 (We Are Water) which I look forward to getting my hands on this year.
Recommended for: those who enjoy a story whose characters are flawed, vulnerable and yet resilient. Lamb's books are character driven and his characters are superb.

The Wild Girl - Kate Forsyth
Another book I have raved about to all and sundry this year. I put it on equal footing with The Book Thief. Forsyth tells the tale of Dortchen Wild and Wilhelm Grimm - their love, the obstacles and how she was a major contributor of the stories he and his brother collected. Loved it. Another classic in the making.
Recommended for: again everyone. I'd especially recommend it for those who like quality, well researched historical fiction.

Maus - Art Spiegelman
Maus was my graphic novel read for my 13 in '13 challenge. I was dubious about graphic novels, thinking no further than the traditional super hero or anime stuff I knew was around. I cannot even remember how I stumbled upon this, but am so grateful I did. It lead me to further exploring the genre including Blankets by Craig Thompson, another excellent graphic novel.
Recommended for: graphic novels are excellent for reluctant readers. Maus is a thoughtful and emotional look at the Nazi's during World War II.

Dirt Music - Tim Winton
Yep, Winton again. This I listened to as a talking book and became immersed. Again, flawed characters who really need to get their shit together! I never know whether to hate or pity the characters, they seem so bent on self destruction! One of the few authors who doesn't annoy me when he leaves the ending up in the air and unresolved!
Recommended for: lovers of good Australian fiction. Winton is this country's best.

The Rosie Project - Graeme Simsion
One of the funniest things I have read all year! Simsion's tale of a man who has Aspberger's searching for a wife is guaranteed to have you in stitches. Well written and just hilarious.
Recommended for: those who like a funny read that doesn't take cheap shots.

And the Mountains Echoed - Khaled Hosseini
Hosseini is just a wonderful storyteller. He keeps you engaged and invested with the story and the characters. His descriptions of Afghanistan are breathtaking - beautiful and harsh all at the same time.  An author who I look forward to reading again and again.
Recommended for: those who want to see how the other half live. Hosseini takes you into a world most of us are lucky to never have to know.
Posted by Unknown at 3:52 PM