Book Review: A Game of Thrones 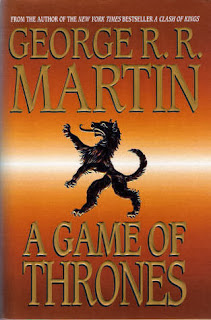 From Goodreads: Summers span decades. Winter can last a lifetime. And the struggle for the Iron Throne has begun.
As Warden of the north, Lord Eddard Stark counts it a curse when King Robert bestows on him the office of the Hand. His honour weighs him down at court where a true man does what he will, not what he must … and a dead enemy is a thing of beauty.
The old gods have no power in the south, Stark’s family is split and there is treachery at court. Worse, the vengeance-mad heir of the deposed Dragon King has grown to maturity in exile in the Free Cities. He claims the Iron Throne.

Thoughts: If you haven't heard about this series, what rock have you been living under? Between the books and the TV series, A Game of Thrones has become a sensation.
This is the first book in the series - and it was good. In a break with tradition, I saw the series before I read the book. I enjoyed the series and am glad that the book was also worth my time. These books are very blood thirsty. Lots of nasty ways to die and characters who seem to enjoy inflicting them on others. Just so you get an idea of how many deaths are in the series, check out this picture I found on Geekologie  . 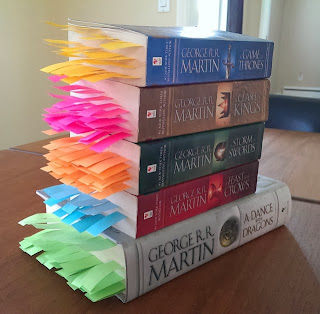 Every post it is a death - so just a few.

The intrigues in the book are complicated with a lot of characters to keep track of but I somehow managed - I do think having seen the series first helped.
I do think this is a series you will either rave about or wonder what all the fuss is about. Personally I just hope Martin maintains the interest and momentum for the whole series.