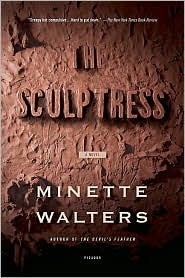 The Sculptress by Minette Walters

Way back in June, I added Minette Walters to the list of authors I wanted to read or reread the back catalogue of. Not long after I started with The Ice House, I (or more to the point, my husband!) put me on a book ban after discovering I had over 60 books to read.  So here we are, several months on and I have finally managed to read the second of Minette Walters books, The Sculptress.

Olive Martin was accused of and what's more, confessed to, killing her mother and sister is a most gruesome fashion. A long time social misfit and object of scorn and disgust due to her gross obesity, Olive has few friends and even fewer champions.

Rosalind Leigh is a journalist who has been given the choice of writing a book about Olive or unemployment. She is fighting her own demons, but the more she looks into Olive's story, the more convinced she becomes that there has been a miscarriage of justice. The problem is, Olive doesn't agree!

I really enjoy Walters writing. Her books move along at a wonderful pace. There are stories within the main story, but not so many or so overwhelming you lose track. To start with the reader is scared of Olive, like the other characters in the book, but the further you go, the more you start to pity and feel sorry for her. Rosalind becomes stronger as you go too, yet her flaws are obvious and believable. The ending was brilliant and leaves the reader not really 100% sure of anything! I'm looking forward to Walters next book on my list The Scolds Bridle.

The first five of Walters books have been adapted for TV by the BBC. I borrowed The Ice House from the library after I read it and plan to put The Sculptress on request tomorrow. It has the brilliant Pauline Quirke in it and will do nicely for Friday night when the husband is off playing volleyball!
Posted by Unknown at 8:38 PM