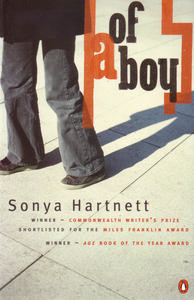 Of A Boy by Sonya Hartnett

Another library pick up. Was reshelving and came across this. I love Sonya Hartnett's young adult stuff and was curious to try one of her adult books.


In 1977 Adrian is nine. He lives with his grandmother and his uncle and is scared of lots of things - like quick sand and spontaneous combustion. He doesn't really fit in and is not quite sure how to do so.

The disappearance of three children not far from where he lives worries him. Will he be next? And what about the three kids who have just moved in over the road? What's their story?

It's hard to describe this book. It's one of those ones you quite enjoy but when someone asks you what it's about, it's hard to put into words. Not one of my favourite Hartnett's, but still worth the read.
Posted by Unknown at 7:57 PM