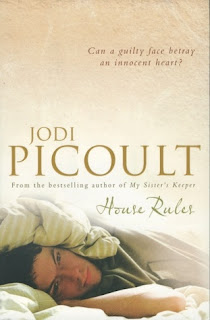 Jacob Hunt is a teenage boy with Asperger's syndrome. He's hopeless at reading social cues or expressing himself to others, and like many children with Asperger's, Jacob has an obsessive focus on one subject - in his case, forensic analysis. He's always showing up at crime scenes, thanks to the police scanner he keeps in his room. But then one day his tutor is found dead, and the police come to question him. Reluctance to make eye contact, stimulatory tics and twitches, inappropriate gestures, all these can look a lot like guilt. Suddenly, Jacob finds himself accused of murder.

House Rules looks at what it means to be different in our society, and at the extremes of love and loyalty a family must call upon to overcome impossible circumstances.

So here's the thing. I use to love Jodi Picoult. It started with The Pact, which I will admit at a second reading this year it wasn't as good as I remembered. I know I  enjoyed Keeping Faith and Songs of the Humpback Whale, both earlier Picoult books. I know Nineteen Minutes it had been coloured by the prior reading of the much grittier We Need to Talk About Kevin. So, taking all of this in to account, I approached House Rules hopefully, but with some doubts.

And once again, here is my problem with Picoult - I don't like her mother characters. In House Rules, the neglect of the lesser, more normal child was not as obvious. While Jacob's brother, Theo seems to have a better understanding and reason to be pushed aside at times for Jacob, I still feel the expectation put upon him by his mother, Emma is unreasonable. Then again, I have taught children who have siblings with a disability and to an extent, this is a given. As the teacher and parent of neurotypical children (a nice term for what is considered "normal"), I found it offensive that there did not seem to be one single adult in the whole book who was willing to find their child's or student's treatment of Jacob. As far as I could work out, no one had ever stepped in and dealt with a child who had called Jacob a retard or picked on him in any way. I know it's certainly something I would not tolerate in either my own kids or students. On top of that, in House Rules, Emma seems completely oblivious to how the legal system works and how it cannot be adjusted simply because Jacob is on the spectrum. Yes, allowances need to be made for his disorder, but it can't be a case of oh he has Asperger's off you go.

Which brings me to another point. I know Asperger's is a relative new diagnosis (it wasn't formally recognised as a separate syndrome until 1994), but, and maybe this is my issue, I would assume most people when they heard the term would register this person was different and may react differently to the general population. There seemed to be no attempt to understand or find out or listen to Emma about Jacob's issues.

My other issue is the social isolation Picoult seems to assume is the norm for families dealing with a child with Asperger's or Autism. Emma has no friends, either does Jacob or Theo. I have friends who have children with Asperger's and Autism Spectrum Disorder. They have friends. So do their kids. Picoult seems to assume that anyone else who is not dealing with these conditions on a daily basis is an uncaring, unsympathetic, judgmental asshole who makes no attempt to understand what their fellow mother/ parent is going through. Sure, I have thought "Thank god it's not me" and have felt guilty every time I have said it. Have I cut contact because their child refuses to make eye contact or has lashed out at my child? No. Then again, I have friends who accept their child's condition, but also work really hard at not using that as the excuse for their their child's behaviour. No eye contact acceptable, biting not!

So apart from these issues, the book was ok. I enjoyed it although I did pick the twist. (really, wasn't that hard) Is it worth reading? Yes, if you are a Picoult fan. I won't be recommending it to friends who have kids with any type of Autism Spectrum Disorder. If I got annoyed at what I think are the inaccuracies, I can only imagine how they would feel.
Posted by Unknown at 8:35 PM