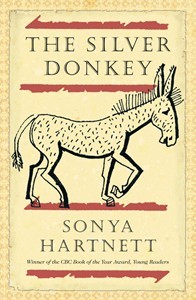 From Goodreads: One bright spring morning in the woods of France, a soldier, blinded by the war, is found by a little girl named Coco, and her older sister Marcelle. In return for their kindness, the soldier tells the sisters marvelous tales, each story connected to the keepsake he carries in his pocket: a perfect, tiny silver donkey.
As the days pass and they struggle in secret to help the soldier reach home, Coco and Marcelle learn the truth behind the silver donkey, and what the precious object means: honesty, loyalty, and courage.

Thoughts:  Sonya Hartnett is quite simply a beautiful writer.  The Silver Donkey was her the first foray out of YA and Adult and into younger reader territory. In my mind that is always a dangerous time for an author, especially one who has so firmly cemented themselves as an outstanding YA author. In reality I think there are very few who do the cross over successfully - Hartnett is without doubt one of them.
The subtly of her writing is still strong - just because her audience is younger she doesn't feel the need to pander to them and explain every single event. A book such as this is ripe for discussion either in a class room or between parent and child. At the same time, Hartnett does not shy away from portraying war as a horrible and nasty business - no glorification here!
Adults take a back seat in this story, the children are driving it, but adult help is sought when it's needed. By doing this Hartnett doesn't stray into the territory of the children accomplishing something they quite simply wouldn't be able to. Themes are plentiful and it could be used to fit many a theme - war, trust, secret keeping, how the world has changed, story telling, loyalty. In the lead up to Remembrance Day  it would be a good book to share with a child who appreciate a war story which did not focus so much on the fighting, but on the possible emotional issues faced by those caught up in such terrible times.

The Silver Donkey gets 4 stars