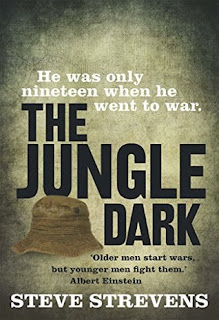 From Goodreads: On 21 July 1969, 3 Platoon, A Company, 6 Battalion, Royal Australian Regiment forced their way through the damp Vietnamese jungle on a patrol as part of Operation Mundingburra. With the insects biting and the humidity sapping their strength, the platoon established a safe harbour and listened as the news came across the radio: Neil Armstrong had become the first man on the moon. Moments later, their skipper, Platoon Commander Lieutenant Peter Hines, stepped on a mine and exploded in a maelstrom of dirt, smoke and blood.
Memories of that fateful day stayed with the members of 3 Platoon for more than a decade before singer-songwriter John Schumann transformed the story into a ballad that would capture the spirit of a generation and become the anthem for the veterans of the Vietnam war.
This is the true story of Frank 'Frankie' Hunt and the other soldiers of 3 Platoon who were the inspiration for Redgum's 1983 hit song I Was Only Nineteen. Using first-hand accounts, The Jungle Dark is both a fascinating Australian yarn and enthralling military history. Vividly told, informative and poignant, it also traverses the deep unhealed wounds left in the minds and hearts of Vietnam soldiers long after they had left the battlefield.

Thoughts:
Then someone yelled out "Contact"', and the bloke behind me swore.


We hooked in there for hours, then a God almighty roar;
Frankie kicked a mine the day that mankind kicked the moon: -
God help me, he was going home in June.

Sometimes a book comes to you out of the blue and insists on being read. The Jungle Dark happened to come through the return chutes at work when I was in check in. For some reason, I flipped it over to read the back and the words Platoon Commander Lieutenant Peter Hines jumped out at me. I'd grown up hearing about Peter Hines because apparently I looked a bit like him - he was my mum's cousin.  I'd been told he was the person in the song I Was Only 19, but I kind of assumed mum meant it was something that happened to Peter on that day, not that he was the actually "Frankie". Turns out he was.
Steve Strevens recount of 3 Platoon is heart wrenching in so many ways. It focuses on Frank Hunt and the impact Vietnam had on him, not only during the conflict but afterwards.  The other members of 3 Platoon also have their story told, including Peter. These are men we should be proud of. These are men who handled themselves with dignity, loyalty and courage in the most god awful circumstances. These are men whose suffering did not end when they left the battlefield and came home.
Strevens treats the whole situation with remarkable sensitivity. He outlines the declining support for the war among the general populace, but does not lay blame. He places you in the middle of the fear and uncertainty of the jungle dark. The importance of being able to rely on your mates, the focus on not letting them down, working as a team, becoming family. They became important because they understood, they knew what you had been through and the trauma you continued to suffer. He deals with the reality of these men's lives after Vietnam and the effect it has on their lives to this very day.
I truly believe Australia's attitude towards our service men and women serving overseas was changed by our acknowledgement of how badly many of the Vietnam vets had been treated at the very late welcome home parade in 1987. The parade and the memorial was the country's way of saying while we don't necessarily agree with you being in a foreign war zone, we respect the job you did and the sacrifices you made. I think it has gone a long way towards people being able to separate their disagreement about our service personnel being in countries like Afghanistan and Iraq from the men and women who serve there.
For me The Jungle Dark has an obvious personal connection, a link to my personal history. The moment I finished I got on line and bought a copy for myself, my mum and my sister. It's also a interesting, moving read. If you want an insight into Vietnam this is well worth reading.


The Jungle Dark gets 4 stars