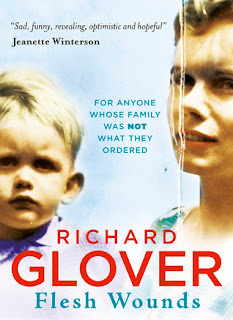 From Goodreads: A mother who invented her past, a father who was often absent, a son who wondered if this could really be his family.
Richard Glover's favourite dinner party game is called 'Who's Got the Weirdest Parents?'. It's a game he always thinks he'll win. There was his mother, a deluded snob, who made up large swathes of her past and who ran away with Richard's English teacher, a Tolkien devotee, nudist and stuffed-toy collector. There was his father, a distant alcoholic, who ran through a gamut of wives, yachts and failed dreams. And there was Richard himself, a confused teenager, vulnerable to strange men, trying to find a family he could belong to. As he eventually accepted, the only way to make sense of the present was to go back to the past - but beware of what you might find there. Truth can leave wounds - even if they are only flesh wounds.Part poignant family memoir, part rollicking venture into a 1970s Australia, this is a book for anyone who's wondered if their family is the oddest one on the planet. The answer: 'No'. There is always something stranger out there.

Thoughts: I reckon everyone has a story they could tell during a game of "Who's Got the Weirdest Parents?", I know I've got a couple that could be contenders for the top prize. Richard Glover's life is full of them.
Flesh Wounds is our book group book for November. It was my choice, made after I heard him interviewed by Richard Fidler on the Conversation Hour. It's a great interview - funny and cringe worthy at the same time. You can find it here and I highly recommend a listen.
The book was the same, you'd be laughing out loud one moment and then cringing the next, feeling slightly ashamed that what you were laughing at was someone's life and delusions. But Glover wants you to laugh, he wants you to acknowledge the absurd and the crazy.
As a book group read it's fantastic. Lots of discussion to be had and pasts to be delved in. I'm sure there will be a round or two of Who's Got the Weirdest Parents and some pondering over what stories our own children might tell when they are older.
I think it must have taken incredible courage for Richard Glover to write this book. His parents are not portrayed in a good light in any way. In fact as you read, you find yourself wondering how Glover turned out to be a functioning adult at all. He is a shining example of resilience and thriving despite not because of your circumstances. This book could have so easily been a depressing, dark and horrible journey through a not terribly nice childhood. Instead Glover presents his life as it is what it is and you can't change that so you might as well make the best of it. He acknowledges there are aspects of his life he keeps at arms length, developing a kind of detachment from the more bizarre and hurtful parts. His continued devotion to his parents, continuing to visit and include them in his life is not something I think a lot of people would have done. If nothing else this book goes to show a dysfunctional family does not mean the end of a functional life. As Glover himself says: " ...So many people had inadequate childhoods but we're not all insane or self-harming or miserable. We just found the love we needed elsewhere... This is the amazing resilience of humans. We are hungry for love and - mostly - we somehow find it."