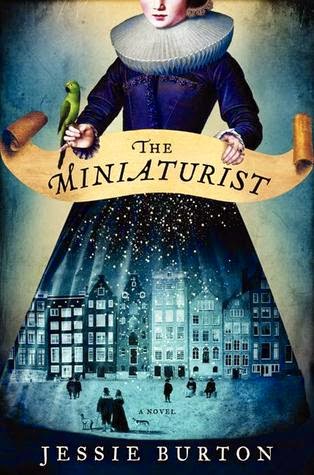 From Goodreads: Set in seventeenth century Amsterdam-a city ruled by glittering wealth and oppressive religion-a masterful debut steeped in atmosphere and shimmering with mystery, in the tradition of Emma Donoghue, Sarah Waters, and Sarah Dunant.
"There is nothing hidden that will not be revealed…"
On a brisk autumn day in 1686, eighteen-year-old Nella Oortman arrives in Amsterdam to begin a new life as the wife of illustrious merchant trader Johannes Brandt. But her new home, while splendorous, is not welcoming. Johannes is kind yet distant, always locked in his study or at his warehouse office-leaving Nella alone with his sister, the sharp-tongued and forbidding Marin.
But Nella's world changes when Johannes presents her with an extraordinary wedding gift: a cabinet-sized replica of their home. To furnish her gift, Nella engages the services of a miniaturist-an elusive and enigmatic artist whose tiny creations mirror their real-life counterparts in eerie and unexpected ways . . .
Johannes' gift helps Nella to pierce the closed world of the Brandt household. But as she uncovers its unusual secrets, she begins to understand-and fear-the escalating dangers that await them all. In this repressively pious society where gold is worshipped second only to God, to be different is a threat to the moral fabric of society, and not even a man as rich as Johannes is safe. Only one person seems to see the fate that awaits them. Is the miniaturist the key to their salvation . . . or the architect of their destruction?
Enchanting, beautiful, and exquisitely suspenseful, The Miniaturist is a magnificent story of love and obsession, betrayal and retribution, appearance and truth.

Thoughts: This was our Book Club read for December. Even though I knew I wasn't going to be at the meeting, I wanted to read it as it sounded pretty good – and let's face it, I'll read anything!
I would have loved to have been part of the discussion to see what others thought of it. I enjoyed it, the writing was good, the story was compelling and I did want to know what happened. But for me the book just petered out...just finished with no real conclusion either way. It was almost like I was missing part of the book. In the end the book just left me feeling...meh.
There are a few other things that didn't sit quite right with me as well. For an 18 year old who came from a country village,  to a marriage to a man who barely spoke to her, into a household that sounded pretty foreboding, Nella found her feet awfully quickly.  Her reluctance to stand up to Marian didn't fit with her apparent confidence in this new situation. The maid as well seemed a bit too forward given the general atmosphere of the house.
Where the novel does stand up well is in the meticulous research into the period and place it is set. This I think is what saves it. There is promise there from Jessie Burton as a debut author. I will be interested to see her next book and how she grows.
Posted by Unknown at 8:40 AM