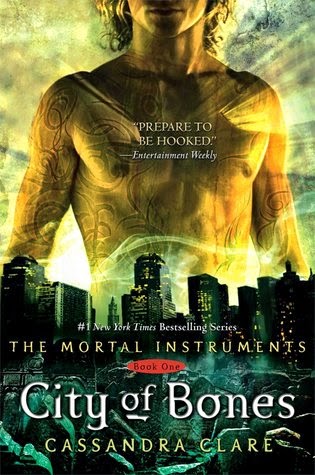 From Goodreads: When fifteen-year-old Clary Fray heads out to the Pandemonium Club in New York City, she hardly expects to witness a murder― much less a murder committed by three teenagers covered with strange tattoos and brandishing bizarre weapons. Then the body disappears into thin air. It's hard to call the police when the murderers are invisible to everyone else and when there is nothing―not even a smear of blood―to show that a boy has died. Or was he a boy?
This is Clary's first meeting with the Shadowhunters, warriors dedicated to ridding the earth of demons. It's also her first encounter with Jace, a Shadowhunter who looks a little like an angel and acts a lot like a jerk. Within twenty-four hours Clary is pulled into Jace's world with a vengeance, when her mother disappears and Clary herself is attacked by a demon. But why would demons be interested in ordinary mundanes like Clary and her mother? And how did Clary suddenly get the Sight? The Shadowhunters would like to know...


Thoughts:  As I've mentioned before, I've started to struggle with a lot of young adult fiction. I've had trouble putting it into words, however recently Australian author John Marsden (Best known for his YA Tomorrow When the War Began series) managed to say what I've been thinking - “I’ve gotten a little tired of the young adult market, or the genre. It seems to have gotten very crowded with a lot of pretty unattractive books; a lot of books where writers are trying terribly hard to capture the voice of this funky, cool teenager; it just doesn’t ring true. Too many adults have invaded the territory with motives that might have more to do with their own immaturity than anything else.’’ (Source)
I've contemplated The Mortal Instruments series for awhile, but after two recommendations (one from my non reading hairdresser and the second from my book mad niece) I decided to give it a go.
So the verdict – I'll be reading the second. While it wasn't the can't put down read of something like The Hunger Games, it was engaging enough and more importantly intelligent enough to keep me interested. There are characters I would like to know more about like Alec and Isabelle. There is room for characters to grow and the story to develop. The universe the author has created is interesting and again, has room to develop. I picked the twist early, but was still interested enough for it to not ruin or taint the story. If you're looking for a halfway decent YA series, this is worth a look.
Posted by Unknown at 8:13 AM