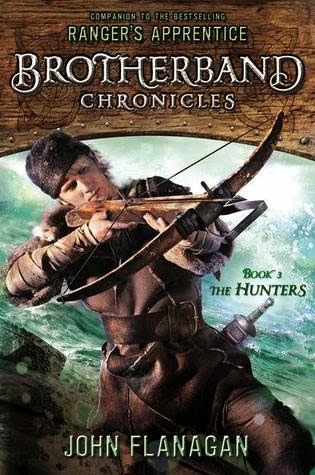 From Goodreads: Hal and his brotherband crew are hot on the trail of the pirate Zavac and they have one thing only on their minds: Stopping the bloodthirsty thief before he can do more damage. Of course, they also know Zavac has the Andomal, the priceless Skandian artifact stolen when the brotherband let down their guard. The chase leads down mighty rivers, terrifying rapids, to the lawless fortress of Ragusa. If Hal is to succeed, he will need to go beyond his brotherband training. He will need to challenge the pirate one-on-one, knowing only one of them will survive.


Thoughts: The Hunters picks up where The Invaders left off. Zavac the pirate escaped with the Andomal and the Heron Brotherband, lead by Hal are in hot pursuit.
One of the things I love about John Flanagan is his female characters. None of your wishy washy damsels in distress here. Flanagan's female characters in the Ranger's Apprentice Series were strong, capable and diverse. The Invaders saw the first major female character in the Brotherband series and Lydia returns in this instalment. And just like her Ranger's Apprentice counterparts she is more than capable of taking care of herself. What is sad is that is worth mentioning in a review.
As always Flanagan has written a fast paced, exciting adventure story that would appeal to a wide audience. A highly recommended series for any teen.