Don't Tell Mum I Work on the Rigs, She Thinks I'm a Piano Player in a Whorehouse 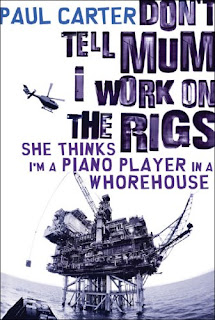 Don't Tell Mum I Work on the Rigs, She Thinks I'm a Piano Player in a Whorehouse by Paul Carter

I listened to this in the car, the only way I can do audio books. It was read by Paul Carter, which I love as it makes the voice authentic.

Paul Carter has been shot at, hijacked and held hostage.
He's almost died of dysentery in Asia and toothache in Russia, watched a Texan lose his mind in the jungles of Asia, lost a lot of money backing a mouse against a scorpion in a fight to the death, and been served cocktails by an orang-utan on an ocean freighter. And that's just his day job.
Taking postings in some of the world's wildest and most remote regions, not to mention some of the roughest oil rigs on the planet, Paul has worked, gotten into trouble and been given serious talkings to in locations as far-flung as the North Sea, Middle East, Borneo and Tunisia, as exotic as Sumatera, Vietnam and Thailand, and as flat out dangerous as Columbia, Nigeria and Russia, with some of the maddest, baddest and strangest people you could ever hope not to meet.

The description from Goodreads sums it up too well to not use. Paul Carter has managed not only to live an amazing life working on rigs, but is lucky enough to have the talent to write about it. I found myself laughing out loud so many times while reading this. His description of a plane journey home with dysentery had me not only laughing, but clenching my bum in sympathy! As for the flight home with a tooth abscess,  hilarious! In between you get an amazing view of the world from the view of oil rigs. Nigeria sounds terrifying, Russia crazy and Japan brilliant. I'm looking forward to the sequel, This is Not a Drill: Just Another Glorious Day in the Oilfield.

This link here takes you to a page where you can watch and hear and a few interviews with Paul Carter, well worth it!
Posted by Unknown at 9:58 AM