Mistborn Book One: The Final Empire 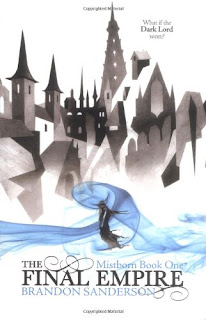 Mistborn Book One: The Final Empire by Brandon Sanderson

First off, don't you just love the cover of this? I think it's fantastic. I'd frame it and hang it on my wall even!

This is our book group book for August.

For a thousand years the ash fell and no flowers bloomed. For a thousand years the Skaa slaved in misery and lived in fear. For a thousand years the Lord Ruler, the Sliver of Infinity, reigned with absolute power and ultimate terror, divinely invincible. Then, when hope was so long lost that not even its memory remained, a terribly scarred, heart-broken half-Skaa rediscovered it in the depths of the Lord Rulers most hellish prison. Kelsier snapped and found in himself the powers of a Mistborn. A brilliant thief and natural leader, he turned his talents to the ultimate caper, with the Lord Ruler himself as the mark. Kel's plan looks like the ultimate long shot, until luck brings a ragged girl named Vin into his life. Like him, she's a half-Skaa orphan, but she's lived a much harsher life. Vin has learned to expect betrayal from everyone she meets, and gotten it. She will have to learn to trust, if Kel is to help her master powers of which she never dreamed.

For me it was a bit slow to begin with, but it picked up speed and quickly became un-put-downable.  Sanderson has created a world and a story that would be so easy to turn into a movie - and apparently he has sold the rights. It has everything - betrayal, deception, romance, good v's evil.  I will definitely reading the other two.
Posted by Unknown at 9:23 AM