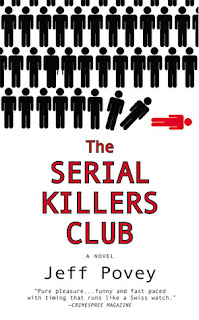 From Goodreads: When our hero finds himself in the path of a serial killer, he somehow manages to defend himself, and give the blood-thirsty madman a taste of his own medicine. But when he goes through the dead man's wallet, he finds a mysterious personal ad inviting him to join a party hosted by Errol Flynn. What begins with passing curiosity soon becomes uncontrollable obsession, as our hero becomes acquainted with 18 killers. Their game: to share the thrill of the hunt and to make sure no two members choose the same two victims. To protect their identities, they have all chosen names of old Hollywood stars, and before long, our hero becomes Douglas Fairbanks, Jr. But he has no intention of following the rules. With a government special agent on his trail who will soon become his partner in crim, "Dougie" plans to knock off the killers one by one, from Carole Lombard to Chuck Norris, to Laurence Olivier and Cher. But what happens when the "stars" notice their numbers dropping?

Thoughts: At the library where I work, our customers can use an app called Overdrive to download ebooks and audio books. Occasionally I have to help someone access the items they want so I figured I better work out how to use it myself! So I downloaded a couple of talking books - this being one of them. It sounded good, sounded light and funny. It even had promise to start with, but by the end I just wanted it to be over! I think part of the problem is Dougie is just an incredibly stupid man. Painfully stupid. He is completely oblivious to anything going on around him that doesn't pertain to him. Every slight by a person, every comment made is reaction to him and if it's negative, he will spin it around to some explanation that strokes his belief in himself as this perfect human specimen. Of course what this means is he is extremely easy to manipulate and completely clueless to it. While it had comic value to start with, by the end it just became plain annoying and repetitive.
It most probably didn't help that I wasn't enthralled by the narrator either. His voice lacked expression and possibly made a dull book even duller. If you were going to give this one a go, I'd suggest reading it, not listening. It is this that convinces me to give it 2 stars instead of 1.

The Serial Killers Club gets 2 stars