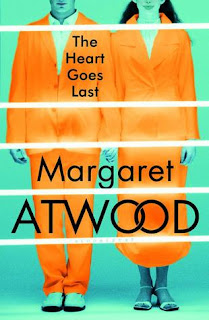 From Goodreads: Living in their car, surviving on tips, Charmaine and Stan are in a desperate state. So, when they see an advertisement for Consilience, a ‘social experiment’ offering stable jobs and a home of their own, they sign up immediately. All they have to do in return for suburban paradise is give up their freedom every second month – swapping their home for a prison cell. At first, all is well. But then, unknown to each other, Stan and Charmaine develop passionate obsessions with their ‘Alternates,’ the couple that occupy their house when they are in prison. Soon the pressures of conformity, mistrust, guilt and sexual desire begin to take over.

Thoughts: This should have been good, it should have been brilliant, especially in the hands of Margaret Atwood. The idea was solid, a world in economic ruin and people desperate enough to do whatever they needed to feel safe and secure. But it wasn't good, it fell short, very short.
I loved The Handmaid's Tale and The Year of the Flood and Atwood has long been on my list of authors to read everything of so I am really disappointed in this.
Charmaine and Stan annoyed the hell out of me. They were both so stupid! There were situations, especially with Charmaine where her inability to see where certain events were leading was astounding. Her tendency to take everything literally and in isolation without taking in what was happening around her made her character hard to believe.
The story was originally written as a serial story, chapters released bit by bit for readers to pick up on. I didn't read it in that form and maybe it worked better as a serial, but as a whole novel it's flawed.
The problem is you're not sure if this is meant to be a black comedy or a serious commentary of the direction of our society and where we are heading. It's almost like it's trying to be both and falling seriously short. There are parts that are farcical (possibilibots and an over abundance of Elvis and Marilyn impersonators to name just two), but they seem to be there as plot devices and nothing more. The story line lurches from the strange to the absurd leaving you feeling confused and let down. However it does hold enough potential to keep you going, I kept holding one waiting for that one moment when it all came together and I got to share in Atwood's grand design. Unfortunately I think the design should never have made it off the drawing board.

The Heart Goes Last gets 2 stars.