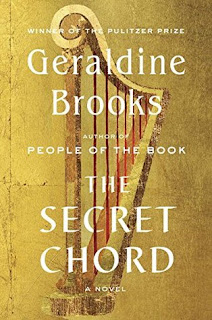 From Goodreads:A rich and utterly absorbing novel about the life of King David, from the Pulitzer Prize–winning author of People of the Book and March.
With more than two million copies of her novels sold, New York Times bestselling author Geraldine Brooks has achieved both popular and critical acclaim. Now, Brooks takes on one of literature’s richest and most enigmatic figures: a man who shimmers between history and legend. Peeling away the myth to bring David to life in Second Iron Age Israel, Brooks traces the arc of his journey from obscurity to fame, from shepherd to soldier, from hero to traitor, from beloved king to murderous despot and into his remorseful and diminished dotage.
The Secret Chord provides new context for some of the best-known episodes of David’s life while also focusing on others, even more remarkable and emotionally intense, that have been neglected.  We see David through the eyes of those who love him or fear him—from the prophet Natan, voice of his conscience, to his wives Mikhal, Avigail, and Batsheva, and finally to Solomon, the late-born son who redeems his Lear-like old age. Brooks has an uncanny ability to hear and transform characters from history, and this beautifully written, unvarnished saga of faith, desire, family, ambition, betrayal, and power will enthrall her many fans.

Thoughts: Some books you can just immerse yourself in. Float along on a river of rich language, lavish descriptions and an enthralling story. The Secret Chord is such a book. If we continue the river analogy, it starts off a slow steady place, almost ebbing in parts before the flow picks up and you find yourself bouncing over rapids and the occasional waterfall .
Told from the point of view of Natan, King David's prophet, The Secret Chord leads us into David's inner world. His early years before meeting Natan are covered as his mother, brother and first wife tell Natan of their lives with David and how he became the man he was.
Brook's portrayal of David show a flawed man who truly believed he was anointed by God to be king. His was a brutal reign at times, but his destiny to unite the tribes of Israel and bring peace is something he had complete faith in. The constant of Natan gives the reader a voice to hold onto and believe. Natan has no vested interest in lying so you believe what he says implicitly and value his point of view. Poor Natan had no choice over his destiny either, but he followed it with humility and bravery.
Not having a great knowledge of biblical stories, I was not bothered by Brook's use of traditional Hebrew names. For some reviewers this deviation from the names they have grown up with was a struggle. At times the book is graphic in it's descriptions of battle and rape, but they were pretty brutal times.
If you are a Geraldine Brooks fan, I'd highly recommend this to you. It will definitely be up there as one of my best reads of 2015.

The Secret Chord gets 5 stars