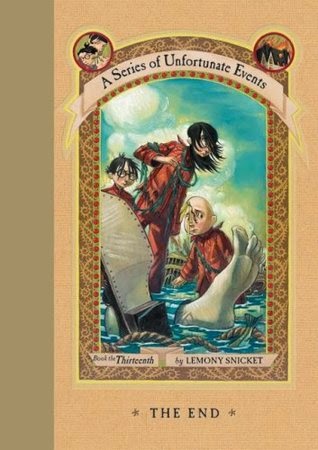 From Goodreads: Dear Reader, You are presumably looking at the back of this book, or the end of THE END. The end of THE END is the best place to begin THE END, because if you read THE END from the beginning of the beginning of THE END to the end of the end of THE END, you will arrive at the end of the end of your rope.
This book is the last in A Series of Unfortunate Events, and even if you braved the previous twelve volumes, you probably can't stand such unpleasantries as a fearsome storm, a suspicious beverage, a herd of wild sheep, an enormous bird cage, and a truly haunting secret about the Baudelaire parents.
It has been my solemn occupation to complete the history of the Baudelaire orphans, and at last I am finished. You likely have some other occupation, so if I were you I would drop this book at once, so THE END does not finish you.
With all due respect,
Lemony Snicket
Thoughts: And thus, we come to The End - the final book in a Series of Unfortunate Events. We almost didn't make it - in fact, we reorganised our car pool arrangements to ensure we finished before the school holidays. The End does not explain everything - in fact it most probably explains very little and raises a few more questions. Many reviews I have read of it take umbrage at this but for me it was the only way it could end. As the series went, things became murkier and murkier. The children started to realise that not everything is black or white, good people can do bad things and bad people can do good things. Questions can get answered, but quite often those answers simply throw up more questions. If this book wrapped everything up neatly it would have been so out of line with the rest of the series I would have been offended. To follow this whole series through to the end takes commitment but I think it was well worth the effort.
Posted by Unknown at 3:37 PM