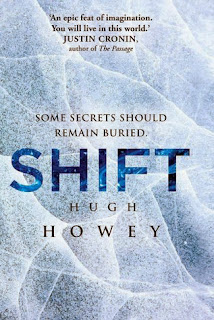 Synopsis: In 2007, the Center for Automation in Nanobiotech (CAN) outlined the hardware and software platform that would one day allow robots smaller than human cells to make medical diagnoses, conduct repairs, and even self-propagate. In the same year, the CBS network re-aired a program about the effects of propranolol on sufferers of extreme trauma. A simple pill, it had been discovered, could wipe out the memory of any traumatic event. At almost the same moment in humanity’s broad history, mankind had discovered the means for bringing about its utter downfall. And the ability to forget it ever happened. This is the sequel to the New York Times bestselling WOOL series.
Contains First Shift, Second Shift, and Third Shift. (source: http://www.hughhowey.com/books/shift-omnibus-edition/)

Thoughts: I really enjoyed Wool and was thrilled to learn that Shift was actually a prequel that explained how the silos came to be.
Can I just say Howey's vision of our future is pretty bleak. Really, not much hope for humankind. I actually found his idea of our future as bleak as Orwell's and Huxley's. Really hope that none of them are right.
Shift was, for me, as good a read as Wool. I've read reviews that complain about the characters, that they were flat, one dimensional. For me, that kind of fitted with the book as a whole. Emotion must be controlled, you must not get too attached to anything or anyone and someone is always watching. At the same time, you were aware of the tension simmering just under the surface - lots of putting on a good face while questioning where this whole thing is going.
I really enjoyed the switching back and forth between Silo 1 and the others. It gives the reader the whole picture - something the characters don't have. For me, the series title of Silo alludes to more than the physical structures the characters are living in. It's about compartmentalisation - of everything. Emotions, societal roles, societal structure, communities. I look forward to reading the third installment - Dust and seeing how this all works out.