So today I bring you the second of three book reviews of Mills and Boons novels. Want to know why I'm reviewing Mills and Boons on my blog? It all started here, which lead to this and three friends reviewing the three I didn't read. Miss Dove has already submitted her review and today I give you the woman who put the whole idea in my head in the first place. My wonderful gorgeous friend Kirsty - thank you darling, the promised champagne will be delivered as soon as I am able. 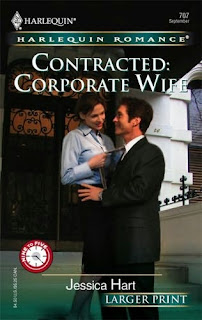 "Oh, number two. It's got a millionaire and a single mum with kids so that hits several stereotypes. I'm sure that one of the kids will crack his cold, determined heart and he'll start falling in love, run away and then come back and confess all... at which point she'll have tears welling up as she says how seeing him with her kids has made her fall in love with him, too. Then they'll have another wedding in the spirit intended, complete with cute bridal party and declarations of love for all.

Well, I'm pretty sure that's how it will go. You read it and let me know if I got it right".

With those words I pretty much doomed myself. When will I learn? Never, ever, ever toss a glib comment at Kylie when it comes to books… a subject that demands and deserves both thought and respect. Truthfully, I was just so stunned that not only was she going to read a trashy romance but that she'd checked four of them out on her library card. I know that if I was ever tempted by something so light, fluffy and lacking in substance I wouldn't be sullying my library card - or professional reputation! - on them, I'd be buying them from an op shop. Or, as I did, I'd make a smart remark and end up getting what has become known as "The Care Package from Hell" landing in my letterbox. For there, tucked neatly under the lovely note and two packages of chocolate (including my favourite Ferrero Rocher chocolates!) was the very book I'd laughed at. The challenge was on, I agreed to read it and then review it.

I'll be honest, reading the book wasn't hard. Well, apart from the fact it didn't require much brain power it was also a great giggle. I, like most other teenagers, at one stage read a dozen or so of this genre and then recognised the formula they followed and promptly read another three or four to confirm it - and to laugh. But reviewing it, that was harder. Why? Well, it appears that a book so easily read doesn't necessarily become a book that stays in your memory. That means I've actually had to read the book twice, just to remind myself of the main plot points. As it turned out, my predictions weren't entirely accurate. It seems that the Mills & Boon formula has undergone a bit of tweaking in the last… however many years since I read one.

A millionaire who's determined not to fall in love.

Patrick Farr is perfectly happy with his bachelor life, wining and dining beautiful young women. If only he could make them understand that marriage is definitely not on the agenda!

He decides there is only one way to prove that he will never marry for love - a marriage of convenience. His PA, Louisa Dennison, is cool and calm under pressure. She's also a single mum, bringing up two very demanding kids. So when Patrick proposes, what will her answer be? After all his could answer all her prayers…

I opened the book thinking that I was going to find Patrick to be rather vapid, Louisa would be cold and the kids would be whinging little brats. And yet I still opened it… something that continues to surprise me. When Louisa, or Lou as she is more warmly referred to throughout the book, ordered champagne on the fourth page I decided it probably wasn't going to be as terrible as I expected. After all, the woman has taste! And, as it turns out, she really does. Patrick is a workaholic who, at heart, just seems scared of getting hurt, hence his reluctance to commit. After a tipsy conversation at the beginning of the book where Lou jokingly suggests that to escape the menace of his band of leggy blondes demanding commitment he should just marry someone like her to give himself some space, but he'd still be welcome to date them on the side, I was well on my way to liking her and her very dry sense of humour.

Patrick takes Lou up on her offer and it all appears very businesslike, but she's already falling for him, he's falling for her - and not realising it - and the scenes with his family reveals how great a catch he really is. Of course, anyone that subscribes to the theory that kids are honest and wouldn't like someone who doesn't like them (and don't people say the same about dogs, cats and whatever else they can think of?) would realise that its all going to come good as Lou's kids - a fourteen year old and an eleven year old - warmed quickly to Patrick and he was quite in tune with their feelings and reciprocated them, too.

They got married and settled down quite happily with separate rooms and a fairly well established "no touching" rule. Well, Lou could touch Patrick's credit cards, but that was it. Patrick did try dating a couple of times and discovered - shock, horror! - that it wasn't what he wanted. He started wanting what he already had, a happy home and a family that loved him. Of course, he didn't truly have it, but he had the illusion of it. And Lou? Well, she started really wanting Patrick and had to work hard to keep the green eyed monster under wraps when he was dating… and her increased passion for him under wraps when he was at home. As for the kids, they had their important part to play about two thirds into the book so they weren't entirely left out.

You know that at the end there will be a crisis of some sort and that the truth will out itself. Or, if you're like me, you expect another episode of in vino veritas. Given that the book started with them drinking champagne I was mildly surprised to find that the declarations of love happened over a cup of tea. Still, it did finally happen, precipitated by the death of Lou's beloved aunt who, like in all good romance novels - and the bad ones, too - left her an unexpected fortune. Suddenly their rather odd marriage contract - freedom for him, access to his money for her - was no longer needed. There was a slight misunderstanding before the expected declaration of love… but it did happen.

Light, fluffy and rather forgettable? Yes. But was it as bad as I expected? Well, no. They weren't cookie cutter Mills & Boon characters but seemed to have a bit of personality and warmth, both of which I didn't fully expect. I actually got the giggles a couple of times - and not just because I was reading a romance novel. It's not the greatest book I've ever read, of course, but it wasn't as downright awful as I thought it might be. I'm not sure whether Mills & Boon have evolved or I just had really low expectations. Either way, I'm not planning on reading another one anytime soon… although I may re-read this one every so often, purely for the amusement that Kylie actually bought it and sent it to me. After all, the woman (usually!) has great taste in books, friends and champagne… and she was only a bit off with one of those three categories this time.