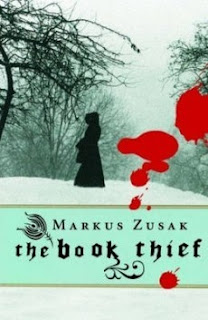 From Goodreads: It is 1939. Nazi Germany. The country is holding its breath. Death has never been busier, and will be busier still. By her brother's graveside, Liesel's life is changed when she picks up a single object, partially hidden in the snow. It is The Gravedigger's Handbook, left behind there by accident, and it is her first act of book thievery. So begins a love affair with books and words, as Liesel, with the help of her accordian-playing foster father, learns to read. Soon she is stealing books from Nazi book-burnings, the mayor's wife's library, wherever there are books to be found. But these are dangerous times. When Liesel's foster family hides a Jewish fist-fighter in their basement, Liesel's world is both opened up, and closed down. In superbly crafted writing that burns with intensity, award-winning author Markus Zusak has given us one of the most enduring stories of our time.

Thoughts: Wow. Just wow. Where to start with this? The language - beautiful. Zusak's writing is phenomenal. I found myself frequently stopping to post quotes on Facebook just to share with everyone.

A definition not found in the dictionary-Not leaving: an act of trust and love, often deciphered by children.

After ten minutes or so, what was most prominent in the cellar was a kind of nonmovement. Their bodies were welded together and only their feet changed position or pressure. Stillness was shackled to their faces. They watched each other and waited.

In fact, I'm pretty sure I could open this book to just about any page and find something that captures my attention immediately. Add to that a storyline that breaks your heart one minutes and lifts you to great heights the next, and you have a book that will stay with you long after you have finished it.

Zusak weaves a tale so poignant  and emotional you are truly lost in his world for the time you are reading. As I approached the end I became more reluctant to read it, both because I didn't want it to end and because I didn't want it to end the way I knew it would. His characters breath, walk through your house and laugh at your silly little life and your silly little worries. As for the narrator - Death - he draws you attention to things you never thought about, gives a different perspective on the world we live in.

I guess humans like to watch a little destruction. Sand castles, houses of cards, that's where they begin. Their great skills is their capacity to escalate.


I wanted to tell the book thief many things, about beauty and brutality. But what could I tell her about those things that she didn't already know? I wanted to explain that I am constantly overestimating and underestimating the human race-that rarely do I ever simply estimate it. I wanted to ask her how the same thing could be so ugly and so glorious, and its words and stories so damning and brilliant.


Perhaps the best way to summon up this book for me is from another reviewer on Goodreads. Tamara said: